Objectives: toassess the nutritional status of children under fifteen years old of the Principality of Asturias, identifying those parameters altered by excess or defect and to return the information obtained to pediatricians and managers.

Methods: retrospective cross-sectional descriptive study. Target population: children under 15 years old of Asturias born between 1995 and 2012. Data source: computerized records at primary care clinic. Variables: last recorded weight and size, extent and date of birth, gender, and codes: area, base area and pediatrician. Indicators calculated: weight/age; size/age; body mass index (BMI)/age and weight/length (<five years). Patterns used for comparison: WHO standards and used the software ANTHRO and ANTHRO PLUS. The standard deviation (SD) by age and sex for BMI/age, height/age and weight/age, (Z-standard) and the prevalence of each variable adjusted for age and sex were calculated for each child.

Many studies demonstrate the importance of adequate nutrition for the proper development and health of children and adolescents and its impact in future health, both at the individual and the community levels. The impact of nutrition on health can even reach across generations, as shown by the epigenetic research of Pembrey and Sjöström.1,2

While in developed countries the prevalence of excess weight, inclusive of overweight and obesity, is the most pressing concern, it is also important to detect areas with abnormally low weight resulting from individual factors, the socio-cultural environment and the economic crisis.

We felt that it would be useful to assess the current situation to obtain information on the main areas requiring especial intervention, particularly at this time when, due to the crisis, we must be alert to possible pockets of malnutrition.

Still, the variability in the criteria used to defined overweight and obesity and the fact that each country has developed its own growth charts for both cross-sectional and longitudinal4,5 data make the comparison of data difficult.

To address these problems, the World Health Organization (WHO) led the development of charts with a prescriptive approach that show how children should grow when their environment allows the optimal development of their genetic potential. In 2006, the WHO6 presented these charts for children under 5 years of age, which have already been adopted by more than 125 countries. As an extension of these charts, in 2007 the WHO presented growth references for schoolchildren 5 to 19 years of age 7, so that homogeneous criteria are available for making assessments and comparisons. The WHO has also published support software, ANTHRO (age 0 to 60 months) and ANTHRO PLUS (age > 5 years) that can be used to analyse the nutritional status of individuals and groups, facilitating the analysis and enabling worldwide comparison of data.8,9

Few studies focus on primary care (PC) and its important role in the early diagnosis of nutritional disorders. Considering that children are continuously monitored from birth to 14 years of age in our public health system, PC is the perfect setting to achieve these objectives.

Our overall aim was to assess the nutritional status of the population under 15 years of age receiving care at the health care centres of the Principality of Asturias, determining the prevalence of short stature, overweight, obesity, severe obesity and underweight based on the WHO standards.

Our specific objectives included giving detailed feedback to healthcare professionals and providing the public health authorities with an overview of the areas with the higher and lower prevalences to assist them in planning and prioritising intervention strategies.

We conducted a cross-sectional retrospective descriptive study. We built a database with the following characteristics from the review of the electronic medical records held by the Servicio de Salud del Principado de Asturias (Department of Health of the Principality of Asturias, SESPA):

Sample universe: all children younger than 15 years born between January 1, 1995 through March 2012 that received services at any health care centre in Asturias. We included the data of all children in this age group, including those for who there were no weight or height data available, in order to be able to assess healthcare coverage in relation to the entire universe.

Data, collected from the medical records of each child, for the following variables: date of birth, sex, most recent weight and height (if both were measured the same day), date of weight and height measurement, number of health identity card (tarjeta individual sanitaria [TIS]), country of birth, basic health zone or health care centre, and physician identification code (CIAS) of the doctor in charge.

To guarantee confidentiality, we unlinked each patient’s data from the TIS and provided a different number that would not allow researchers to identify the patient. The data collection department kept a file linking each real TIS with the new value. Once the data were processed and the analysis results were obtained, the reverse process was used to submit to clinicians the data pertaining to their patients.

After gathering the raw data, we removed erroneous data, data for children older than 14 years and records of measurements taken before 2010, keeping only data entered after January 2010 (Appendix 1, Figure 1).

Standards used for reference: WHO growth standards, and after cleaning the data and obtaining a dataset of 89 989 records, the Nutritional Survey tool of the WHO ANTHRO and ANTHRO PLUS applications, used to calculate the age-sex-adjusted SDs for BMI-for-age, height-for-age and weight-for age for each child.

In children younger than 5 years (60 months), the WHO recommends defining overweight as a BMI 2 SD or more above normal to prevent the use of restrictive diets in children during this important period of growth.10

The z-scores for anthropometric indicators were calculated for every child.

We have expressed the prevalence of each variable in graphical and numerical formats, both overall and by age group, sex, and different health care levels (caseloads; the 68 basic health zones; the 8 health care areas; and the autonomous community [AC]).

We present the results accompanied by their confidence intervals, medians, and standard deviations.

Some basic zones with small paediatric populations were grouped under the label “rest of the area” (Appendix 1, Table 1). 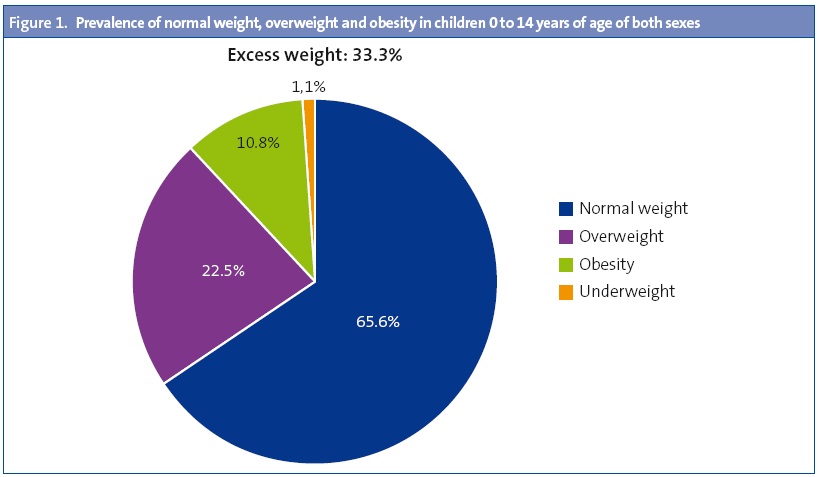 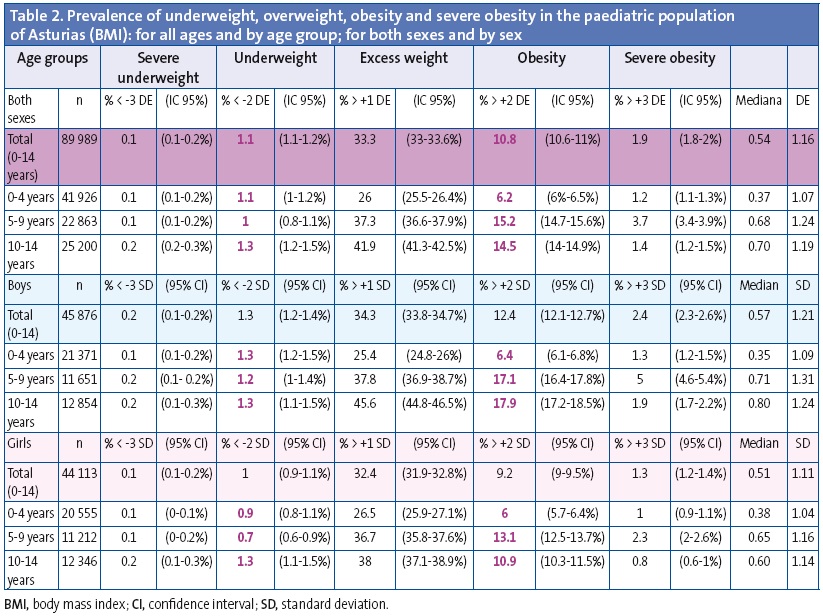 A detailed year-by-year analysis showed that a significant increase in excess weight occurs between the first and second years of life (28.8%), a trend that is sustained until age five years (29.6%); a new peak is observed between ages 7 and 11 years, and the prevalence then descends through age 14 years (Figure 2). 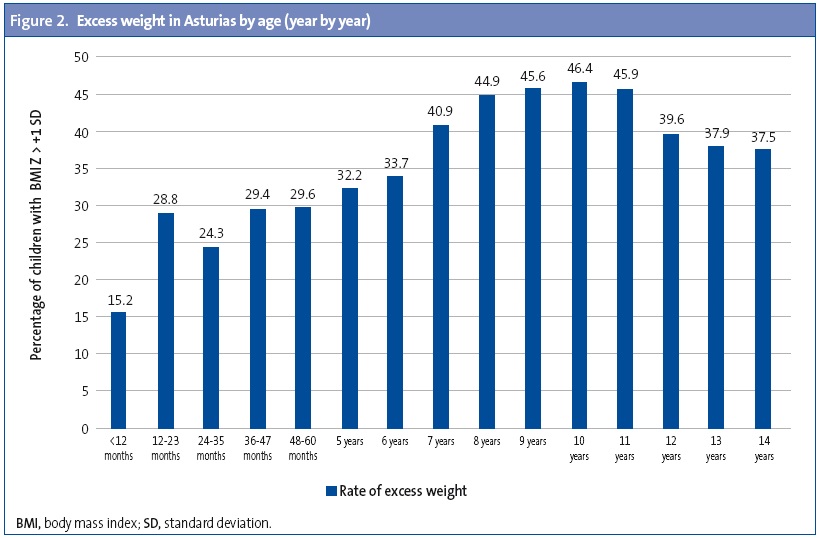 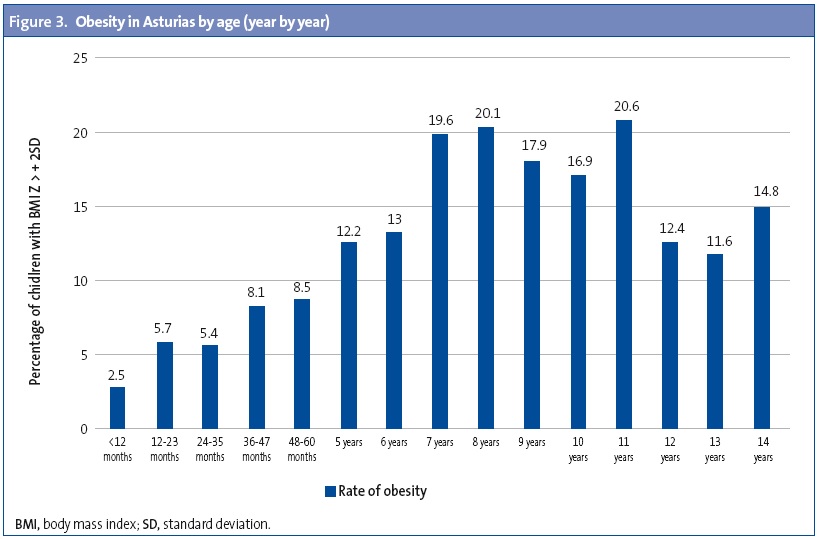 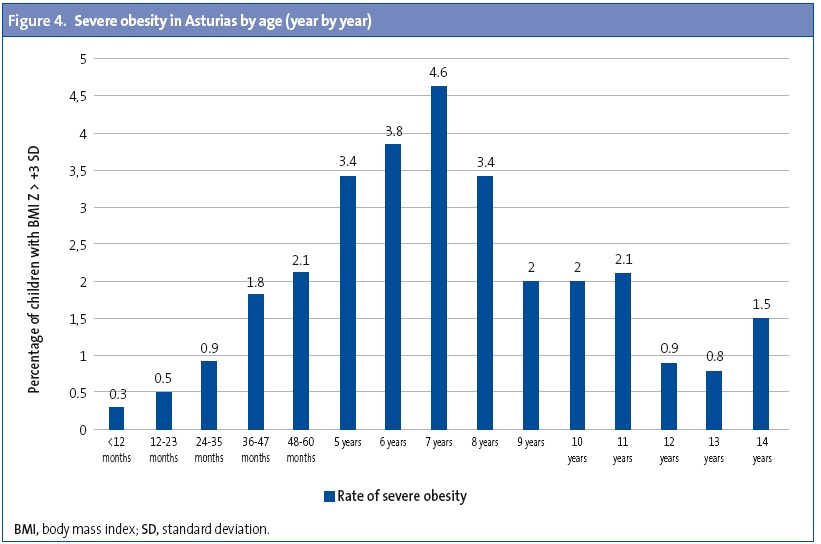 Due to its design, this study offers some advantages for clinicians compared to other published works. First of all, our comparisons are based on international criteria and standards proposed by the WHO, which provide healthy references that are valid for clinical and epidemiological use, and precludes the inconsistencies found in the values of other studies that use epidemiological criteria that differ from the standards used in clinical practise.

Secondly, the study used all the records for holders of a TIS younger than 15 years. In Spain, every child has the right to receive health care, whether their presence in the country is regular or irregular. This has made it possible to calculate anthropometric z-scores for all children and to do an overview of the nutritional status of the paediatric population of Asturias from the individual level to the levels of paediatrics caseloads, basic health zones, health care areas and autonomous communities.

Another added benefit is that it was not necessary to invest additional resources in collecting the raw data; usually, data gathering is one of the most difficult tasks, requiring greater investments.

There are several limitations to this study:

The most salient finding of the study was that there was no evidence of pathology due to malnutrition in the paediatric population of Asturias during this period of economic crisis in which the estimates of child poverty in Spain are high, since a 1.1% rate of low weight and low BMI is within the expected range and can be attributed to chronic conditions, preterm birth, etc. Short stature, which can also be indicative of malnutrition, had a prevalence of 1.8%, which is within normal ranges.

Our results showed a high prevalence of excess weight with a very heterogeneous distribution across health care areas and basic health zones.

We ought to note that the obesity rate approximates the mean for Asturias at early ages: at age 3 years it is already as high as 8.1 (mean, 10.8).

In children 6 to 9 years of age, the prevalence of overweight and obesity in Asturias found in this study, which applied the same criteria as the nationwide ALADINO study,11 is lower than in this latter study, but higher than the prevalence found in the study conducted in Navarra (Figure 5) 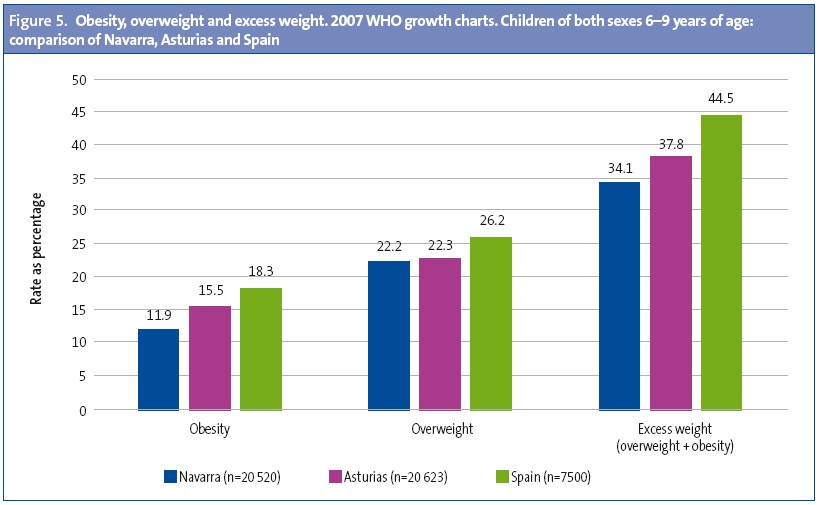 In terms of trends, while the study results are not homogeneous, we did not find significant differences between our current study and the study conducted in Asturias in 2006.

Studies based on population surveys carry significant biases,12 as was the case of the study conducted in Asturias in 291 children 9 and 10 years of age, in which the percentage of obesity was 6.02% based on the survey data and 15.06% based on the data from staff conducting examinations, with the latter figure being closer to the 16.9% of obesity at 10 years found in our study.

We ought to highlight the considerable differences observed not only between health care areas, but also between basic zones within single areas, with the exception of area I (with the highest rates) and area VI (with low and homogeneous rates) (Table 5).

The ranking of the 68 basic health areas under study by prevalence of excess weight, obesity and severe obesity showed that 8 health care centres hold the highest prevalences for all the parameters under study, and some centres have poor rates in only one of the parameters studied, possibly reflecting pockets of the population with specific characteristics.

Of the 68 basic health zones under study, 34 had a prevalence of excess weight above the mean prevalence for Asturias (statistically significant difference), 38 were above the mean for obesity, and 31 for severe obesity; while 24 basic health zones had excess weight rates below the mean prevalence for Asturias, 27 had lower obesity rates, and 25 had lower severe obesity rates. The cause for these sizeable differences has yet to be investigated.

The primary care medical records electronic database (OMI-AP) allows the calculation of the prevalence of childhood obesity and other growth disorders in Asturias.

The high prevalences of overweight and obesity appear at early ages (in the third year of life). The differences in the rates of overweight and obesity are considerable not only between health care areas but also between the basic health zones in a single area, some of which have rates lower or equal to the countries with the lowest prevalence rates in the COSI study.14 Knowing these differences will allow us to specifically design and prioritise interventions in the paediatric population of Asturias.

The specific data for each paediatrician and its comparison with the overall data can guide physicians and nurses in their approach to nutritional disorders in their caseloads.

We want to thank all paediatricians and nurses in the health care centres of Asturias for the quality of their records and the high health coverage of the paediatric population. We want to thank the Central Administration of the SESPA for the access to their database. We are grateful to the Asociación Española de Pediatría de Atención Primaria (Spanish Association of Primary Care Paediatrics) for funding this research, and to the Asociación Asturiana de Pediatría de Atención Primaria (Asturias Association of Primary Care Paediatrics) for their help.

This study has been supported by the Spanish Association of Primary Care Paediatrics (Asociación Española de Pediatría de Atención Primaria [AEPap]) and has received no other funding. The authors have no conflicts of interest to declare 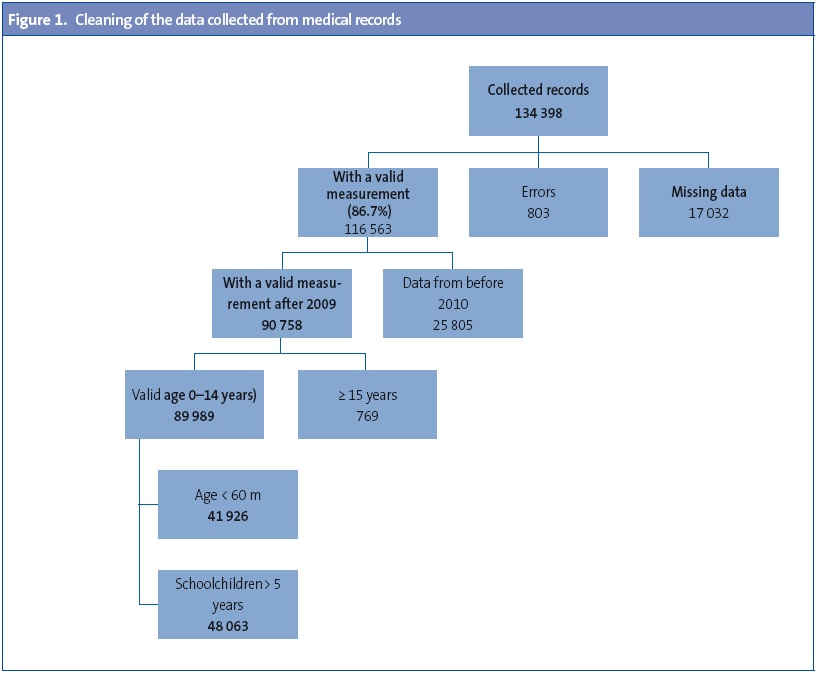 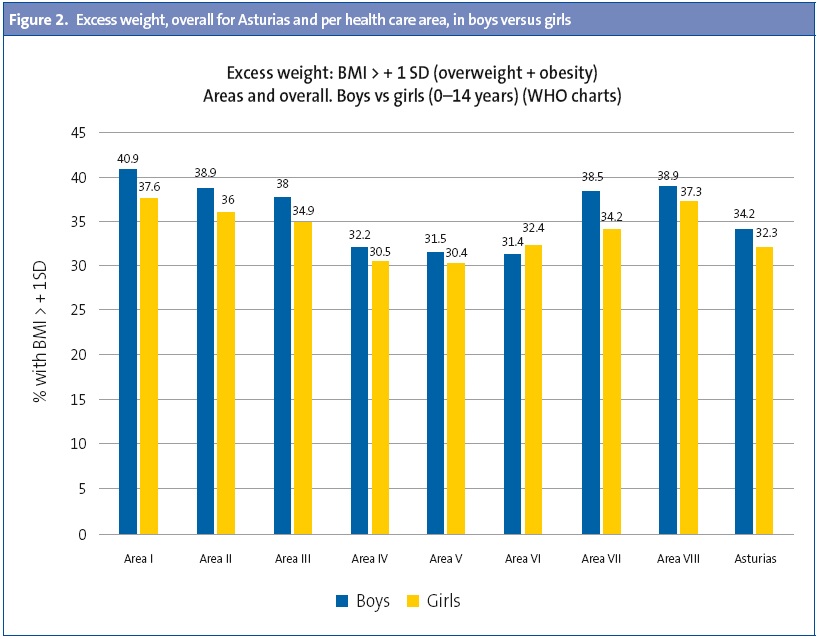 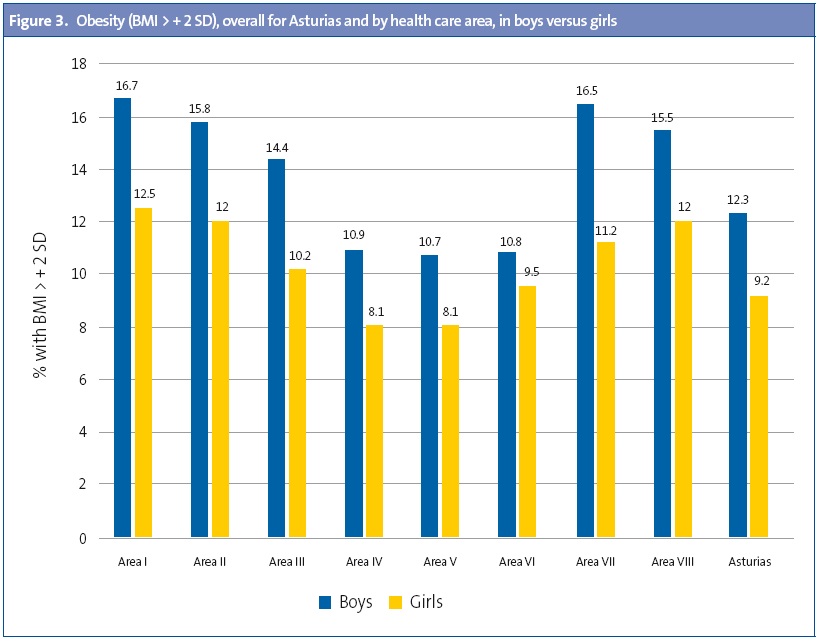 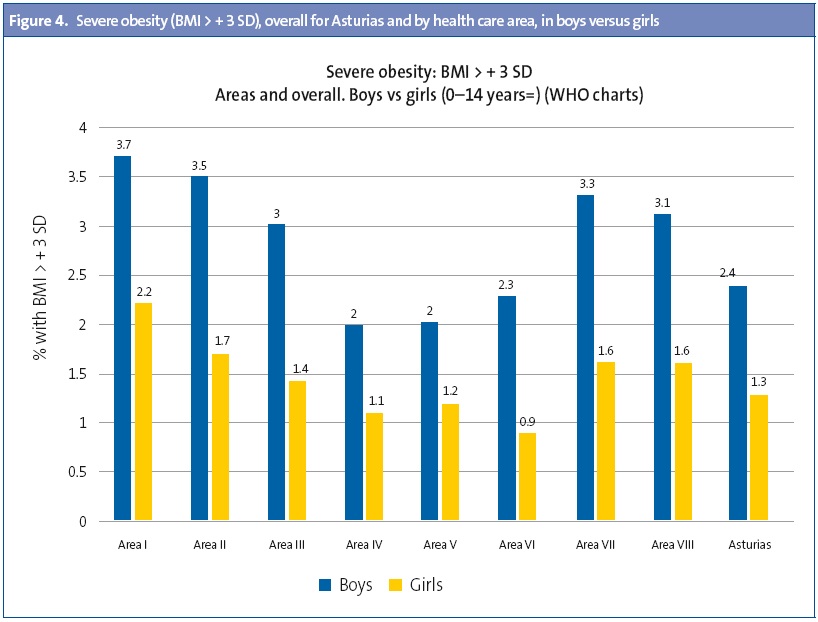 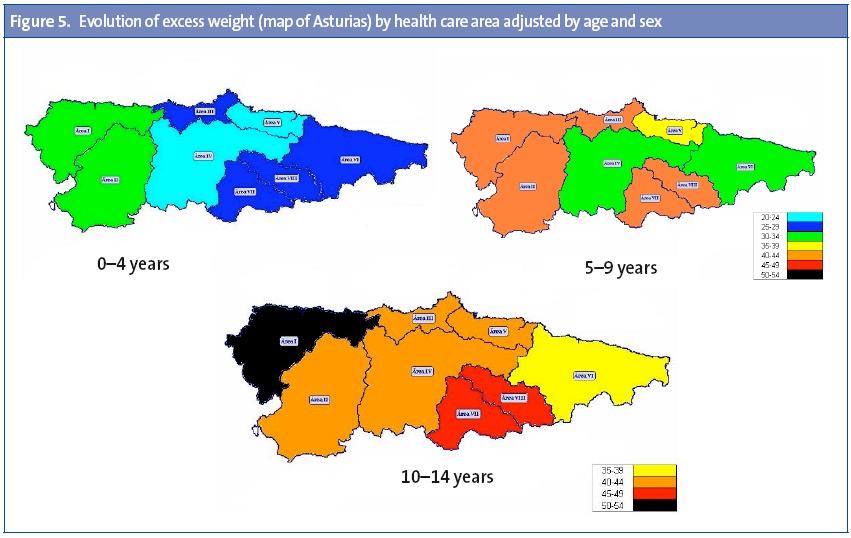 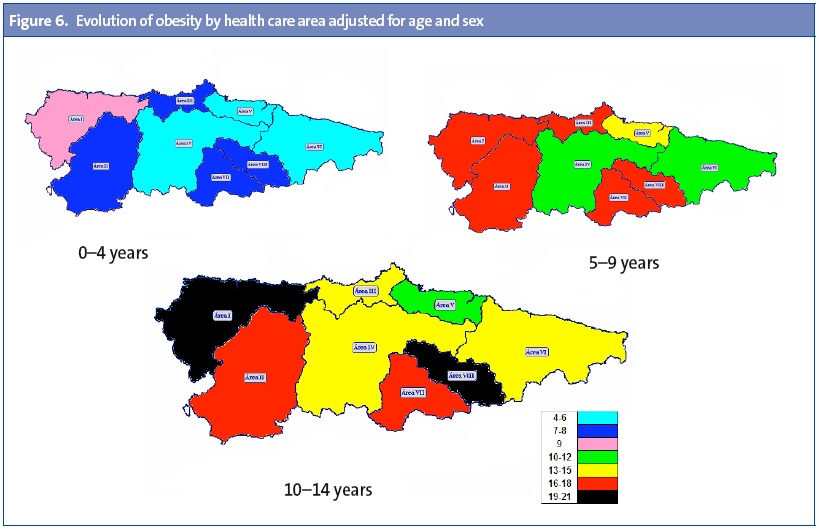 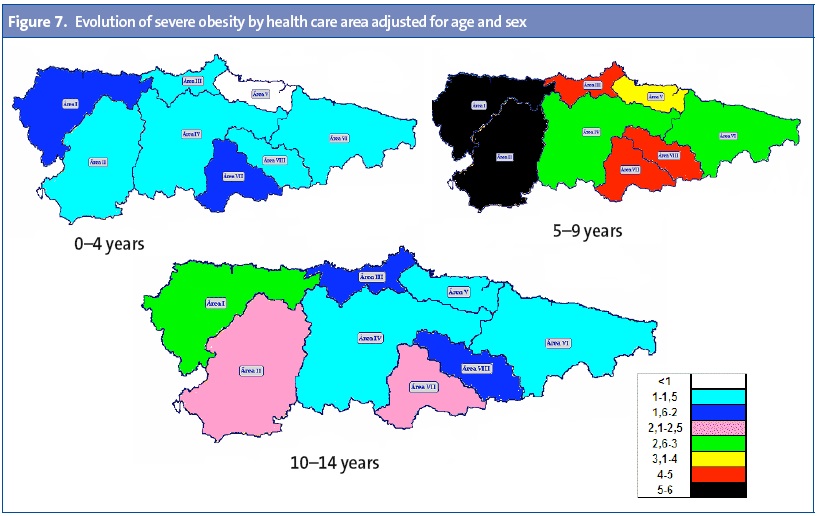 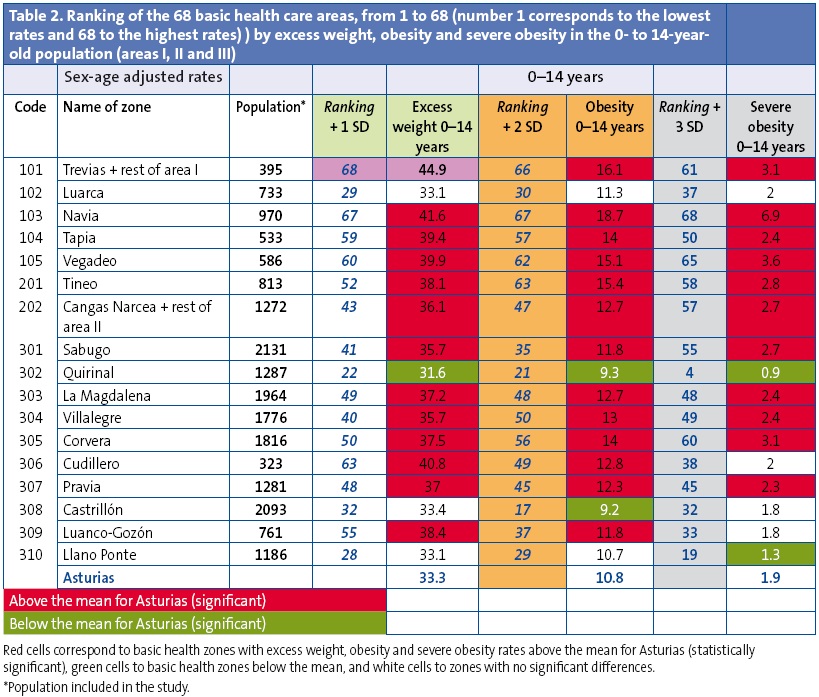 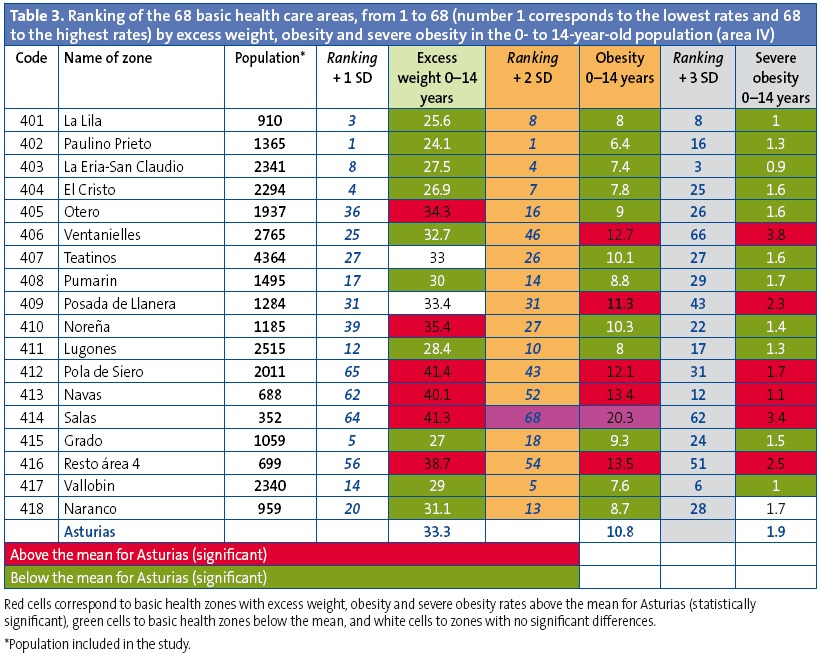 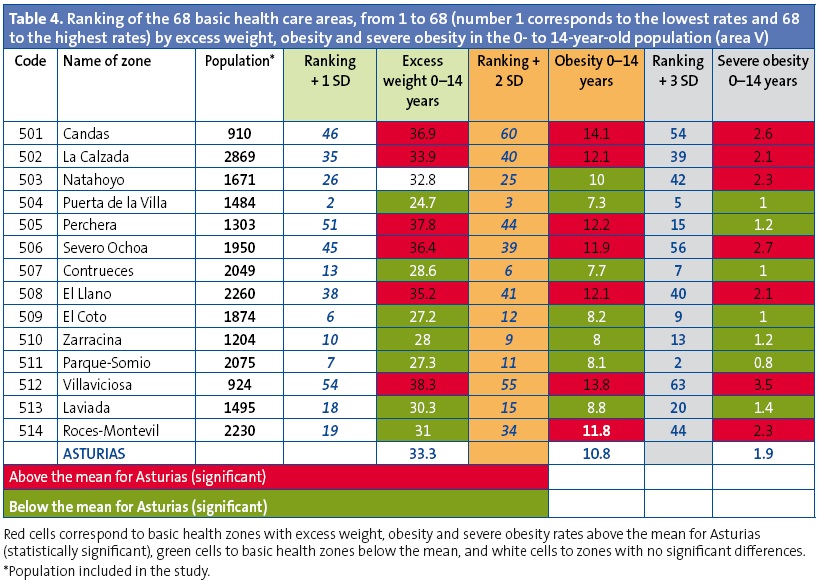 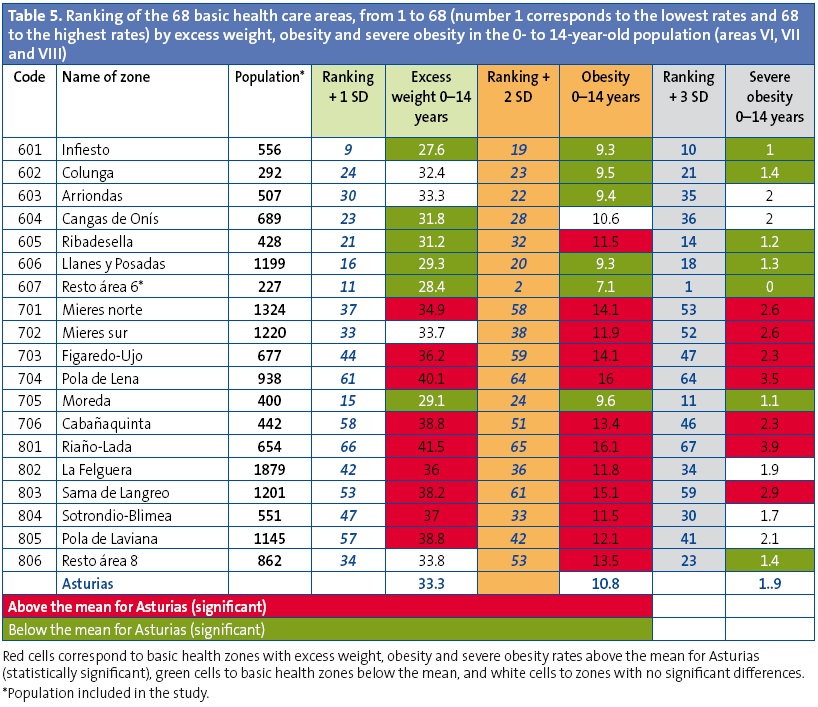 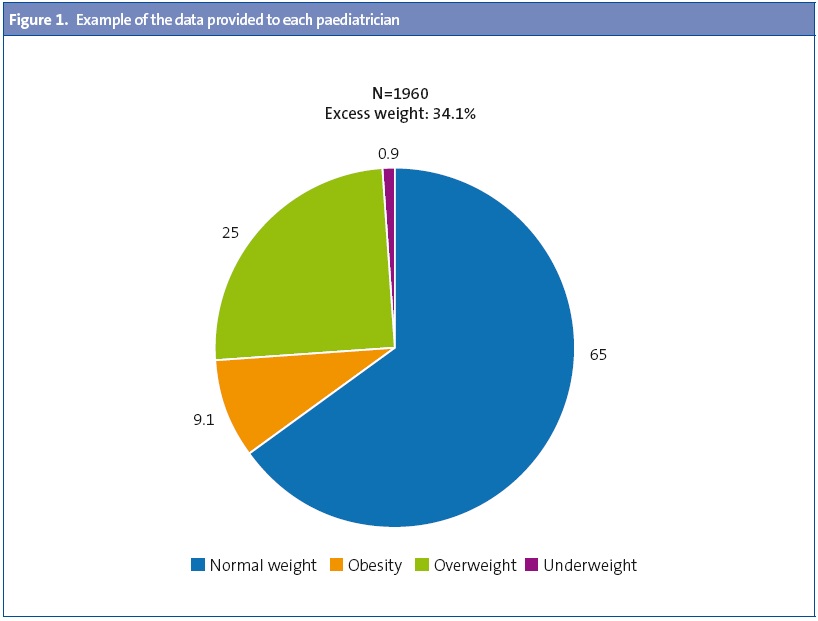 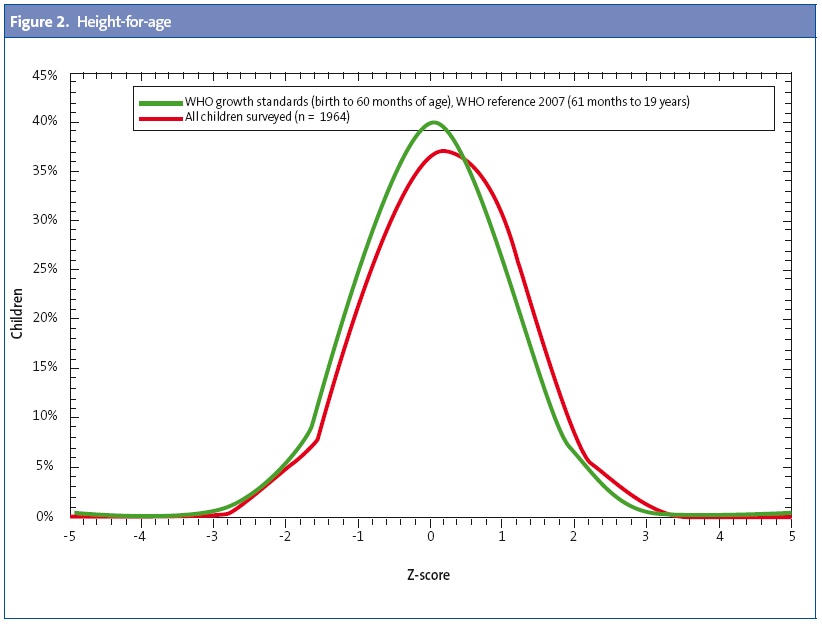 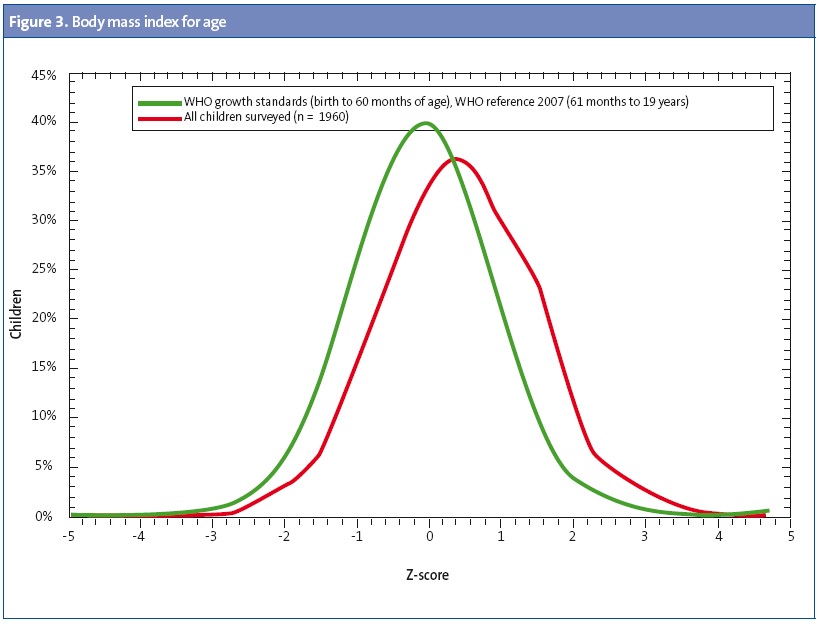 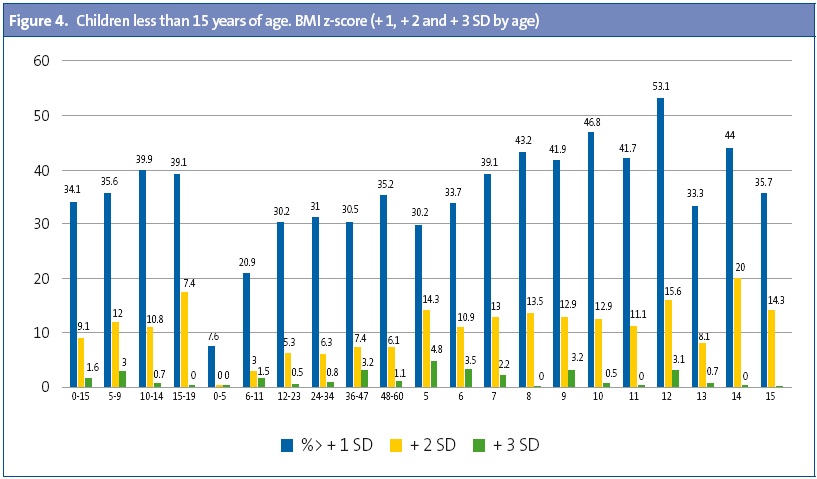 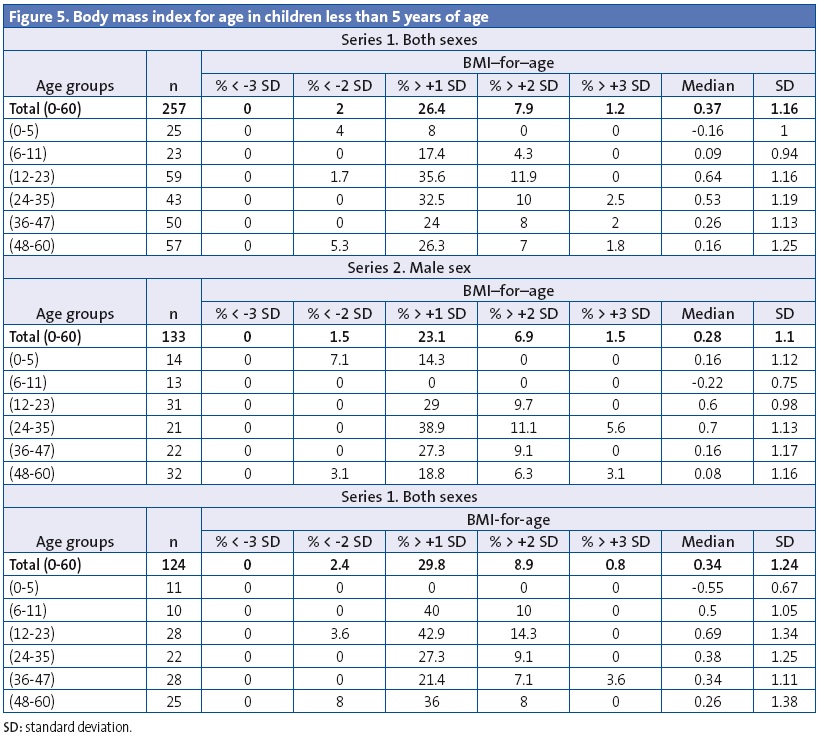 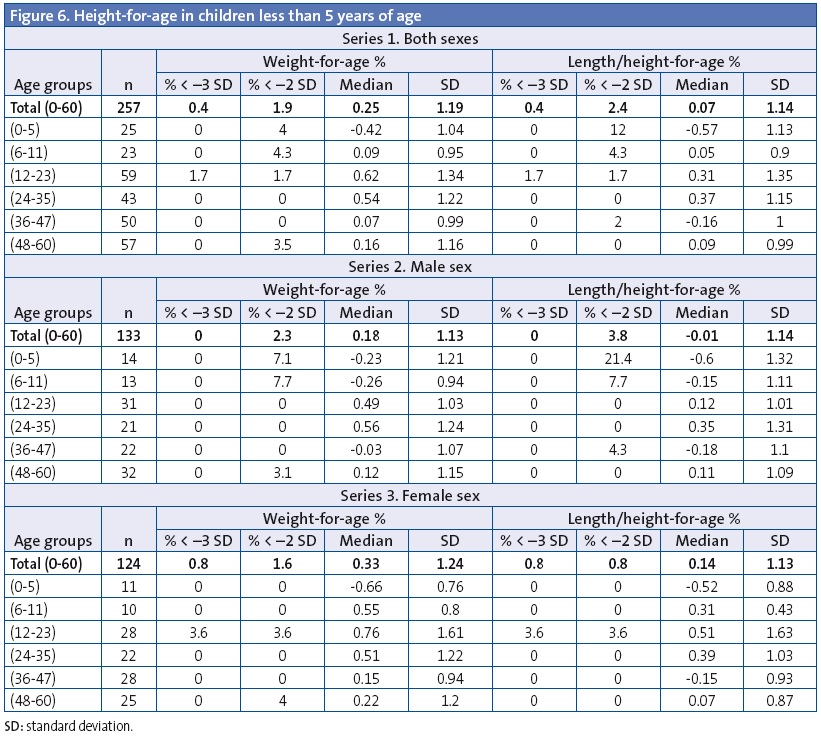 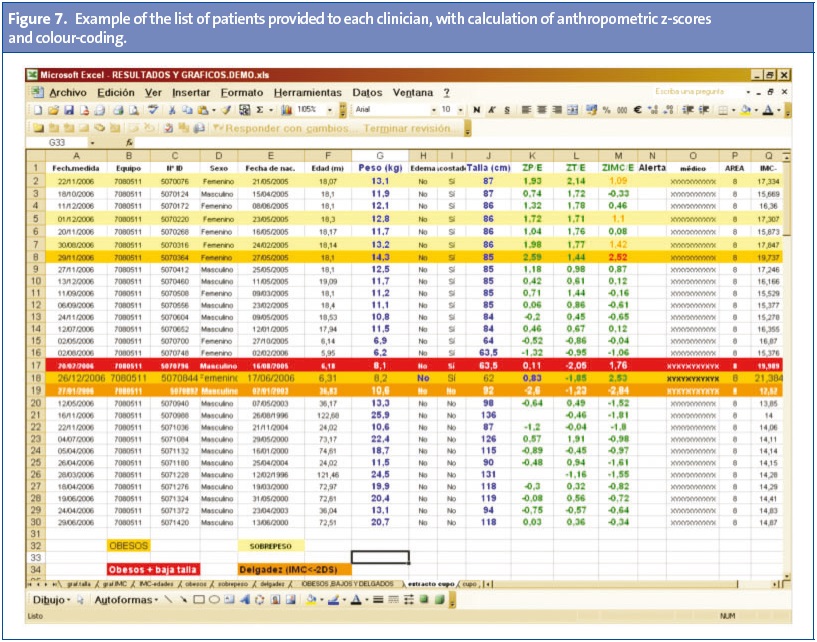