Introduction: to know the causes of tooth extraction in child population, both deciduous and definitive dentition, is necessary to be able to appreciate the impact of the preventive measures, as well as determine the intervention in matters of oral health to get a healthy population.

Materials and methodologies: epidemiologic, observational, descriptive and transversal study is designed in the usual practice of odontology. Its population consisted of people under the age of 18 who went to University clinic, and those who got one or more teeth extracted.

Conclusions: it is necessary to introduce, from pediatric consulting rooms in odontology, preventive measures in the population from 6 to 10 years old, reinforcing dietary and nutritional habits which facilitate a proper reabsorption of deciduous dentition, to decrease the number of extractions and to get a good oral health.

Tooth extraction is one of the commonly performed procedures in the university clinic. The aim of this study was to assess the reasons for tooth extraction, both of primary and permanent teeth, in the paediatric population.

Having knowledge of these causes will allow us to act, implementing health promotion and disease prevention strategies to reduce the number of tooth extractions performed in the paediatric population and contributing to an overall improvement in their oral and dental health.

In Spain, the 2010 Oral Health Survey1 reported a frequency of tooth extractions that ranged between 2.2% and 3.5% in cohorts of children aged 12 to 15 years and the reasons for these interventions, but more specific studies are required to better describe the current situation of orodental health in the paediatric population.

The General Board of Dentists of Spain (Consejo General de Colegios de Odontólogos y Estomatólogos de España) has established that the main indications for tooth extraction are: severe decay in a tooth that cannot be restored or rehabilitated; abnormalities in tooth location or position that cause other abnormalities that cannot be resolved with another approach, and orthodontic, prosthetic or surgical reasons.5

Currently, numerous studies are focusing on the reasons why tooth extraction is used in the adult population, but there is very little information on this subject for the paediatric population, which is what makes this study pertinent and relevant.

The core of the work in a dental clinic is to implement health promotion and disease prevention strategies with the purpose of increasing the quality of life of patients, and thus, these two factors are key in the paediatric population.

Therefore, it is important to launch interventions to promote dental hygiene, as this is a key priority, along with nutritional counselling, which could include recommendations and directions regarding food selection and dietary habits to help prevent caries and periodontal disease, or to promote the development of jawbones and thus favour tooth replacement. These interventions are more effective if they are implemented with the cooperation of health providers involved in paediatric health, so communication and coordination among all, including paediatricians, family physicians, nurses, dental hygienists and dentists, is of the essence.

For this reason, we proposed the performance of a study in the Universidad Rey Juan Carlos (Madrid, Spain) to analyse the reasons leading to tooth extraction in the paediatric population, converging with one of the orodental health goals in Spain for year 2020,6 which is to advance health promotion and prevention strategies, especially in children and youth. We also sought to analyse the distribution of tooth extractions by age, sex, nationality, number of teeth extracted and reasons for the extraction, and to determine which teeth are most likely to be extracted.

We conducted an epidemiological, observational, descriptive, cross-sectional field study of everyday clinical practice in the context of the practicum of the course on Integrative Paediatric Clinical Dentistry carried out at the University Clinic of the Universidad Rey Juan Carlos (URJC).

The population under study consisted of the patients aged less than 18 years that sought services at the clinic either on their own initiative or following referral by a different health care provider between October 2014 and February 2015, in whom tooth extraction was recommended following an orodental evaluation, and that consented to the collection of data for the purposes of this study.

The sample was obtained by consecutive selection of patients that met the previously mentioned inclusion criteria, excluding patients that refused to participate.

We documented all the tooth extractions performed during this period, collecting data for the variables that follow:

The diagnosis and treatment of the patients included in the study were performed by the two authors of this article. In all patients, after students performed the examination and made a diagnosis, and under the guidance of the faculty, it was decided whether one or more tooth should be extracted, adhering to the criteria for tooth extraction established by The General Board of Dentists of Spain,5 and specifying the reasons for the procedure.

We recorded the data and subsequently analysed them using the SPSS® 19.0 software. We calculated the mean and standard deviation for quantitative variables, and frequencies and percentages for categorical variables.

We requested the informed consent of the patients for their participation in the study, which was granted by a parent or legal guardian. The confidentiality of patients was guaranteed, as the study did not require any personally identifiable information.

During the period under study, a total of 1373 patients received care in the University Clinic of the URJC, with a mean daily caseload of 31.07 patients.

Of the 1373 patients, 55 (4%) underwent tooth extractions. All extractions involved primary teeth, and none were extractions of permanent teeth. 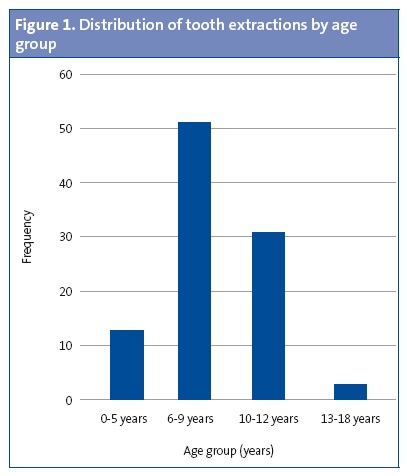 The most frequent indication for tooth extraction was tooth eruption problems, which gave rise to 38 extractions (39.2%), of which 93% were due to abnormal reabsorption of the primary tooth, and 3% of these to the presence of ectopic molars (Figure 2). Extractions due to dental caries amounted to 34% of the total, extractions related to orthodontics to 19.6%, extractions due to trauma to 3.1%, and extractions due to other reasons to 4.1% (internal tooth resorption in 1.03% and cleft-palate in 3.09%).

The mean age at which teeth were extracted due to problems with tooth eruption was 9.07 years, while the mean for teeth extracted due to caries was 7.21 years, and for the purposes of orthodontics, 9.68 years.

The distribution of the reasons for tooth extraction in the group of patients that were Spanish nationals differed from the distribution in the immigrant group, a difference that was statistically significant (P < .0001). In Spanish patients, problems with eruption accounted for 47.29% of extractions, and caries and orthodontics for 22.97%. In immigrant patients, the most frequent reason for tooth extraction was dental caries (69.56%), while tooth eruption problems were not as frequent (13.4%), and only 8.69% of extractions were done for the purposes of orthodontics. 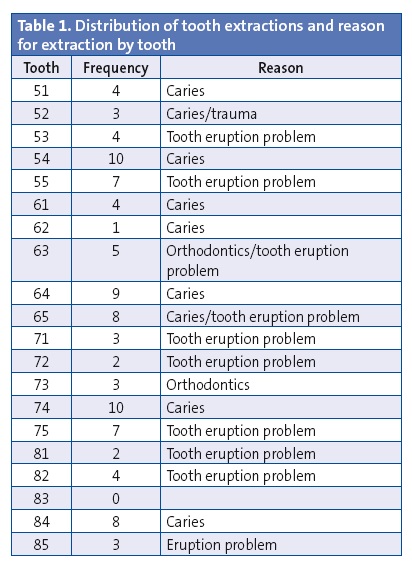 When comparing different studies, it is important to take into account their methodology, the population under study and the inclusion criteria, as variability in these aspects could invalidate comparisons. For this reason, we have restricted the discussion of our research to specific aspects.

The only studies we found that analysed the causes of tooth extractions in paediatric samples were those conducted by Alsheneifi and Hughes,8 and by Lucavechi, Suárez and Barbería.9 However, our study differs in that we conducted our research following diagnosis in the context of face-to-face clinical visits, as opposed to by retrospective review of clinical records.

The difference between sexes in the absolute frequency of tooth extractions (41.2% in boys and 58.8% in girls) was not statistically significant, which was consistent with the findings of other studies.8,9

When we analysed the reasons for tooth extraction in our study, we found that the most frequent reason was abnormal tooth eruption (39.2%), compared to dental caries in the study by Alsheneifi8  (53%), and orthodontics-related reasons in the study of Lucavechi-Alcayaga9 (44.75%). This difference may be due to the particular characteristics of each facility: the study by Alsheneifi8 was conducted in a hospital clinic, while the study by Lucavechi-Alcayaga9 was conducted in a university clinic that offered integral care, including care for paediatric dental diseases and orthodontics.

Caries was the second most frequent reason for tooth extraction in our study (34%), and orthodontic-related reasons were third (19.6%) and peaked between ages 6 and 12 years, which we expected since these are the ages at which orthodontic treatments are performed most often. When we reviewed the scientific literature, we found that the leading reason for extractions in patients aged less than 16 years is orthodontics.5,8,10-13

When it came to the distribution of reasons for extraction in the Spanish and immigrant patients, we found statistically significant correlations. However, we did not find any studies analysing this factor. This substantial difference could be attributed to social and health differences that lead to better or worse hygiene and orodental care related to access barriers in private dental care.

The authors have no conflicts of interest to declare.