Coeliac disease: what are the characteristics of our patients at the time of diagnosis?

Introduction: celiac disease is a chronic pathology that often presents the first symptoms in childhood. Diagnoses of celiac disease have increased in recent years, while the age of diagnosis has reduced.

Conclusions: Increased knowledge about celiac disease among general pediatricians may have influenced the low average age at diagnosis in our sample. The application of diagnostic criteria ESPGHAN 2012 have allowed a significant number diagnoses patients without performing a biopsy.

Coeliac disease is a chronic autoimmune disease induced by the consumption of gluten, a group of proteins found in flour wheat and related cereals such as barley, rye and oats.

It develops in genetically susceptible individuals with haplotypes HLA DQ-2 and/or DQ-8 through the generation of specific antibodies that cause an enteropathy involving the small bowel and leads to villous atrophy. This results in a decreased capacity to absorb dietary nutrients.

The incidence of coeliac disease has increased in recent years, which may be related to more frequent detection of the disease by health care professionals, resulting in prevalences of more than 1% in European countries.1

The classical clinical presentation of a coeliac patient consists in chronic diarrhoea, faltering weight associated with malabsorption, abdominal pain and abdominal distension.2 However, most patients have key signs that are much less specific, such as behavioural changes, iron deficiency, constipation, hypertransaminasemia, etc. In many cases, coeliac disease is diagnosed in asymptomatic patients. Some studies have suggested that diagnosing coeliac disease at an early age and when it is asymptomatic or presents with very mild or nonspecific symptoms is indicative of the appropriate use of tools for early detection.3

The main objective of our study was to analyse the characteristics of the paediatric patients that received a diagnosis of coeliac disease in a tertiary care hospital following referral from primary care in order to understand how this disease presents in current times with the purpose of improving its diagnosis, as it is estimated that for every patient that receives the diagnosis there are another 5 to 10 affected individuals in which it is not diagnosed.2

We conducted an observational, descriptive, cross-sectional retrospective study. We recruited a group of 102 patients with diagnosed coeliac disease from a specialty clinic in paediatric gastroenterology and nutrition in a tertiary care hospital that attended follow-up visits for monitoring their disease.

The data we analysed corresponded to the patient’s medical history and family history, the clinical manifestations of the disease, the presence of comorbidities, the results of serological tests for markers of coeliac disease, genetic testing for HLA, performance of duodenal biopsies and results of their histological analysis. In the laboratory of our hospital, antibody tests are considered positive for titres greater than 7 U/mL for antitransglutaminase antibodies (anti-TG Ab) and antigliadin IgG antibodies (anti-DGPG Ab), and for any detectable level of antiendomysial antibodies (anti-E Ab).

Histological analysis was performed in those cases that required it for diagnostic confirmation based on the 2012 guidelines of the European Society for Paediatric Gastroenterology, Hepatology and Nutrition (ESPGHAN),4 and was performed by taking samples from the duodenal bulb and second portion of the duodenum and subjecting them to histological analysis, with subsequent grading by the Marsh classification.5 Duodenal biopsies were performed in all patients that received the diagnosis before the publication of the 2012 ESPGHAN guidelines.

Of all patients, 94.1% were of Spanish or European descent. Parents were from other ethnicities in six patients: two were Maghrebi, two sub-Saharan Africans, and two Latin American. 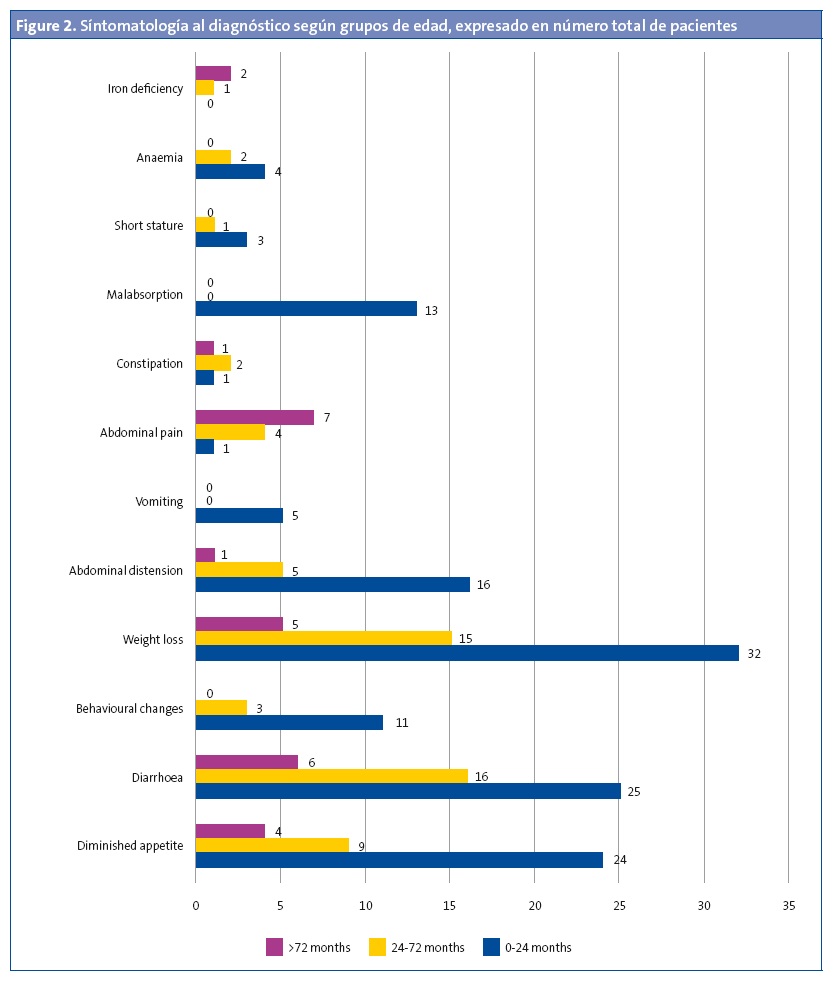 Eleven patients (10.8%) had silent disease, and the diagnosis resulted from chance findings during the evaluation for a different disease. We want to highlight the cases of two patients with diabetes mellitus type 1, two patients that underwent evaluation because they had a first-degree relative with coeliac disease, and one patient with Down syndrome.

A duodenal biopsy was performed in 64 patients (62.8%) to confirm the diagnosis. Figure 3 summarises the findings of the histological analysis of the biopsy specimens. 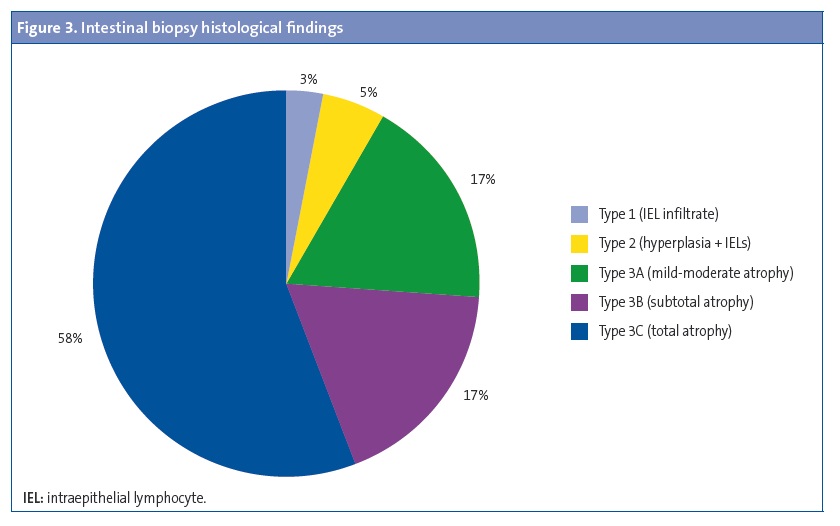 All patients were prescribed a strict gluten-free diet to manage the disease, with regular follow-up checkups performed with the collaboration of the paediatric gastroenterologist and the primary care paediatrician.

The female-to-male ratio was 1.4:1. Some descriptive studies have reported a ratio of 2:1 with a predominance of females, which could be due to a higher prevalence of the HLA DQ2 and DQ8 haplotypes in the female population.6

The prevalence of coeliac disease in relatives of the patients in our study was consistent with the findings of other studies, which report figures ranging between 4% and 12% in first- and second-degree relatives.7

We ought to highlight the age of diagnosis in our sample, as the diagnosis was made before age 2 years in nearly half of the sample, and before age 6 years in 80%. This differs from the figures reported in other studies, in which up to 90% of the diagnoses were made at age 6 years or older.3,8

In many cases, the diagnosis is suspected based on the clinical manifestations of the patient. In our sample, approximately half of the patients had diarrhoea at the time of diagnosis, which is consistent with the findings of other studies. However, there are also studies in which the frequency of diarrhoea is as high as 82.1%,6 which may be due to the disease being diagnosed in older patients.

In some cases, coeliac disease can have extraintestinal manifestations, such as headache, dermatitis herpetiformis, tetany, myopathy, osteoporosis, hyperparathyroidism, amenorrhoea, hyposplenism and neuropsychiatric disorders.10 The most frequent extraintestinal manifestations in our patients were behavioural changes, followed by iron-deficiency anaemia, iron deficiency and dermatitis.

We must take into account that most patients that receive a diagnosis of coeliac disease may present with silent disease or with symptoms that do not fit the classical presentation of the disease, especially at the onset.11. In patients with suspected silent coeliac disease, the elevation in markers of disease is usually detected during an evaluation performed on account of a positive family history or because the patient has another disease that carries a high risk of developing coeliac disease, such as diabetes mellitus type 1, an autoimmune thyroid disease, autoimmune hepatitis, selective IgA deficit, Down syndrome, Williams syndrome or Turner syndrome.2,4

When coeliac disease is suspected, patients should undergo serological testing with anti-Tg, Anti-E and antigliadin antibodies. The working diagnosis established by positive antibody tests should be reinforced by the presence of a compatible HLA phenotype (DQ2, DQ8).

Although the prevalence of coeliac disease in the population is substantial and the disease is believed to be underdiagnosed, several studies that assessed the possibility of screening the general population for coeliac disease by means of serology failed to demonstrate the appropriateness of such measures. 12,13

The test that allows confirmation of the diagnosis in patients that do not meet the ESPGHAN criteria and is considered the gold standard for the diagnosis of coeliac disease is an upper gastrointestinal endoscopy,4 used to collect specimens from the duodenal bulb and second or third portions; taking samples from different parts of the duodenum is important, as the disease can be patchy.14 These specimens are then subjected to histological examination to determine the degree of villous atrophy by the Marsh classification, with grades 2 and 3 definitely confirming the diagnosis.5

It is important to confirm the diagnosis in patients that do not meet those criteria, as some patients with positive markers of coeliac disease may have a normal villous histology and diagnosis may not be possible in them at the time of testing.15,16 The authors of some studies have even suggested the possibility of coeliac disease markers experiencing transient elevations in the context of the development of autoimmune diseases, viral infections and other pathological processes affecting the intestinal mucosa at the time of testing, with subsequent normalization of marker levels. 14,17 Nevertheless, patients with elevated markers should be monitored closely, as they could have latent disease.4

Early diagnosis of coeliac disease, in which primary care paediatricians play a key role, is very important, as it decreases the probability of affected patients developing the multiple complications that result from this condition.

The treatment of coeliac disease consists in following a strictly gluten-free diet.4 Seventy percent of symptomatic patients report an improvement in symptoms two weeks after starting the diet.18 Patients that receive the diagnosis when they are asymptomatic or have minimal symptoms do not experience this clinical improvement, which could account for their poorer adherence to the diet and the higher frequency with which they deviate from it.19

In addition to clinical improvement, adequate adherence to the diet reduces the incidence of the potential complications that result from poorly-controlled disease: nutritional deficiencies due to nutrient malabsorption (iron deficiency, osteoporosis), higher risk of developing other autoimmune diseases (autoimmune thyroiditis, diabetes mellitus typo 1, autoimmune hepatitis), erosive duodenojejunitis and even neoplasias such as T-cell lymphoma and small bowel adenocarcinoma.4,20

The followup and control of patients with coeliac disease consists in monitoring the levels of anti-TG Abs (save in patients with selective IgA deficiency, in whom levels of anti-DPGG Abs are measured instead), tests that are expected to become negative a few months after initiation of a strict gluten-free diet. These controls are performed more frequently after diagnosis, and once these markers have stabilised or become undetectable, it is important that a followup is performed at least every year or two to verify adequate adherence to the diet and assess for the potential development of other associated autoimmune diseases and conditions secondary to nutrient malabsorption, such as those mentioned above.4

A salient finding in our study was the young age of our patients at diagnosis. This is probably due to the correct functioning of the point-of-entry to our healthcare system, which is primary care, and the short time elapsed between the suspicion and the diagnosis of coeliac disease. Another important finding was the number of patients in which coeliac disease was diagnosed without an endoscopic examination by the application of the 2012 ESPGHAN guidelines. We feel compelled to underscore the importance of health care professionals having adequate knowledge and keeping a high level of suspicion for coeliac disease for the purposes of the early and correct diagnosis, treatment and followup of coeliac disease in our patients.