Objective: to determine the frequency, characteristics and socio-educational factors associated with consumption of snuff in secondary school level in a rural area of northern Peru.

Material and methods: cross-sectional study based on a questionnaire that was applied to adolescent students from the first to fifth year of secondary level of a school in northern Peru. The main variable was tobacco consumption among students. Socio-educational variables were gender, age, year of study, place of origin, type of house where he lived (own, rent, pension) were. Frequencies and percentages for the descriptive analysis were described and generalized linear models were used for the statistical associa­tion.

Smoking is currently a serious public health problem in the adolescent population,1,2 causing more than four million preventable deaths a year, due to which the Pan American Health Organization predicts it will be the leading cause of death worldwide by 2030.3,4 Furthermore, according to the World Bank it generates between 6% and 15% of gross health care costs worldwide, and estimated costs of 7000 million euro per year in Spain.5

Several studies affirm that tobacco use starts in adolescence, in the period of secondary education.6-9 According to the Ministry of Health of Peru, this problem starts at age 13 years and is constantly growing, as nearly 3 out of every 10 adolescents smoke without their parents’ knowledge.10

However, few studies have been conducted in Peru to assess tobacco use in the adolescent population and the associated factors,3 such as the Global Youth Tobacco Survey (GYTS) or the study conducted in four Peruvian cities between 2000 and 2003 that found an increasing trend in the proportion of adolescents that smoked.11 On the other hand, there are studies that assert that personal, social and environmental factors influence tobacco use in adolescents.12

Thus, the purpose of our study was to assess tobacco use in adolescent students attending a national parochial school in a rural area of Northern Peru, and identify the socioeducational factors associated with this health problem of national scope.

Design and population of the study

We performed a cross-sectional analytical observational study in secondary students of the public school located in Sullana-Piura, Peru, from April to July 2015. The inclusion criteria were: student in years 1 through 5 of secondary education, correct completion of the study questionnaire, voluntary authorisation of parents for participation in the study, and enrolment during the first academic semester of 2015. We excluded students who did not attend school regularly.

To estimate the sample size, we carried out a pilot study and calculated the size based on the greatest difference found in any of the analysed variables (19% vs 9%, for the place of residence), for a 95% level of confidence, a power of 95% and a single population.

We used a questionnaire that was administered to the students of the school. It comprised 21 items divided into 3 sections: demographic information, questions on tobacco use, and a last section addressed to adolescents that were not currently smoking or had never smoked. The primary outcome was tobacco use in secondary students. The socioeducational variables were sex, age, school year, place of residence, type of residence (rental, owned). Other covariates under study included the reason for smoking, age of smoking initiation, number of cigarettes consumed and parental awareness of the student’s use of tobacco, among others. Other items in the questionnaire (third section) were whether the student was bothered by tobacco smoke, whether his or her parents smoked or whether he or she would help parents and/or peers quit smoking.

We requested the consent of the educational institution, and then the verbal consent of the parents or guardians. One of the principal investigators of the study administered the questionnaires to the secondary education students, and the remaining researchers were responsible for processing the data, starting with the creation of a database using the Microsoft Excel 2010® application (version 2013 for Windows®).

We analysed the data with the statistical software Stata 11.1® (StataCorp LP, College Station, TX, USA). We have described categorical variables as frequencies and percentages, and quantitative variables with the most appropriate measures of central tendency and dispersion based on the results of the Shapiro-Wilk test of normality. When it came to inferential statistics, we used generalised linear models (GLMs) with a logarithmic link and a binomial distribution to calculate the raw and adjusted prevalence ratios (rPR, aPR). We considered p-values of less than 0.05 statistically significant and set the confidence level at 95%.

We safeguarded the confidentiality of the students’ responses by means of codes. We obtained the verbal consent of the school authorities (administrative, academic and staff directors) and the parents or guardians of the students for the participation of the latter in the study.

In our survey, 9.7% (15) of students had smoked at least once. Among them, 86.7% (13) had tried smoking out of curiosity, and the same percentage reported that their parents were not aware of their smoking; furthermore, 6.7% (1) reported currently smoking and 40% (6) that they had started smoking at age 14 years. Table 2 presents the rest of the descriptive statistics. 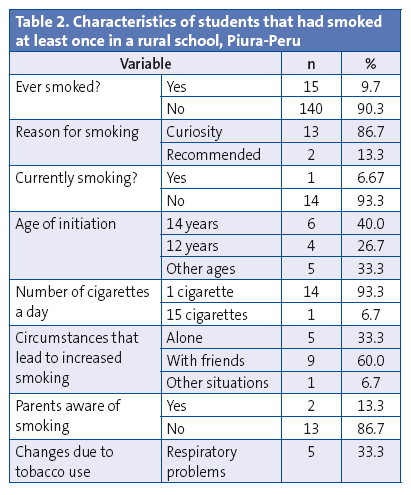 When it came to students that did not smoke, 95.7% (134) reported that they found cigarette smoke unpleasant, and 90.7% (127) that neither of their parents smoked. Lastly, 65% (91) reported a willingness to help their friends or relatives quit smoking. Table 3 presents the rest of the descriptive results. 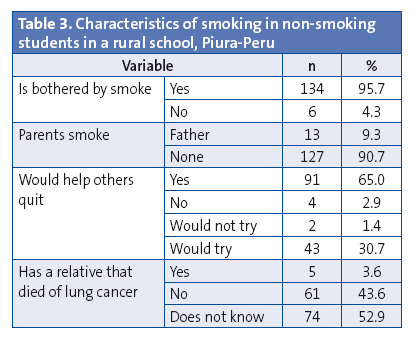 When we entered all the variables in the multivariate model, we found that male sex was associated with having smoked at some point (aPR, 16.6; 95% confidence interval [CI], 1.9–148.4; P = .012), adjusted for age, school year, residing in an urban area and living alone.

Based on the findings of our study, barely 10% of students had ever smoked, and only 1 reported currently smoking, which contrasts with the reports of Zavaleta et al in the Global Youth Tobacco Survey (GYTS)—a source used in similar studies conducted in the United States13,14–who found that nearly 60% of youths in Lima had smoked at least once, while 20% reported current tobacco use.11 Studies in other areas in Latin America have reported percentages of 23% in Colombia, 13% in Brazil and 40% in Chile.9,15,16 On the other hand, studies conducted in Spain have reported variable frequencies ranging between 20% and 52% of the adolescents under study.17,18

We found that 8 out of 10 students had smoked at some point out of curiosity, which can be explained by how adolescents are influenced by sociocultural and individual factors that lead them to try new addictive substances (such as cigarettes), as this stage is characterised by experimenting with this type of psychoactive drugs.3,16,19 This would add to the potential pressure experienced in the cultural environment that influences the adolescent students in our study, as most reported smoking with peers from their social circle.

Although we did not find a significant association between coming from a rural area and having ever smoked, smoking was more prevalent in students from rural areas or town outskirts. Studies conducted in rural areas of Mexico have had similar findings, with an even higher prevalence of smoking (30%)20; and another study reported an increasing trend in tobacco use in male youth,21 consistent with our findings in a rural area of northern Peru.

The rapport between parents and children is essential for the implementation of educational measures regarding tobacco use in the adolescent student population; however, this study did not find evidence of it, as most parents were unaware of their children ever smoking. These findings are consistent with those of the study by Zavaleta, in which 3 out of 10 parents did not know their children smoked.11

The age of initiation was 14 years in most students. This is similar to the age reported in a youth survey conducted in four Peruvian cities, in which the age of initiation was 13 years.10 These results should promote the implementation of well-developed educational interventions for the prevention of this serious public health problem in Peruvian adolescents, which the evidence shows continues to grow in this age group, emphasising the essential role played by parents and peers in preventive programmes.

When it came to sex, the multivariate analysis showed that male sex was associated with having smoked at least once. This has also been reported in studies of similar characteristics7,19 and may be explained by a greater degree of peer pressure. Manrique showed that the main determinants in tobacco use in youth are having a dysfunctional family, the pressure and influence of peers in the environment, and other types of conflict.7 These variables must be studied in populations in Peru, as tobacco use is a multifactorial issue.

One limitation of the study is that we did not explore other circumstances such as alcohol abuse, school violence or the association between tobacco use and academic performance. The results cannot be extrapolated to other schools in Peru due to the expected variability between private and public schools as well as rural and urban schools.

For all of the above, we conclude that while the frequency of tobacco use in the adolescents under study was low, most started smoking due to curiosity and their parents were not aware of their smoking. Most started using tobacco at age 14 years and smoked with friends. The prevalence of smoking was higher in male adolescents.

We recommend the development of broader preventive strategies that include and place responsibility on parents and educators, especially for students enrolled in public schools and from rural areas, like those in this study, since they may be more susceptible to developing these addictive behaviours due to their social environment.