Use of the new technologies and Telemedicine, in the healthy newborn follow up

Reference of this article: Cervantes Guijarro CM, Sánchez Luna M, Bazán Fernández P. Use of the new technologies and Telemedicine, in the healthy newborn follow up. Rev Pediatr Aten Primaria. 2014;16:305-10.

Background: new technologies, as, websites, social networks and telemedicine are increasingly used for the community to improve and promote health. The aim of this study was to demonstrate the impact of the e-Health in primary care medicine of healthy infants during their first 6 months of age.

Results: the use of new technologies, demonstrated a decreased of face to face pediatrics and nursing consultant, p<0.05. Increased of exclusive breastfeeding until six months old: control 18,5%, case 36%. Tracker website 72,5%, social networks 58,8%, telemedicine 88,3% and telemedicine patients groups 78,4%. Survey: a changing the attitudes to go to the emergency hospital by questions about the newborn care, before 58,62% after 0%, p<0.05. Safe sleeping position, to sleep on his back, before 73,68% after 100% p<0.05.

New technologies, such as web pages, social networks and telemedicine, are tools used daily not only by healthcare professionals but also by the general public, so they could play an important role in providing families with guidance to improve children’s health. The questions and concerns of the families of healthy infants can be addressed without the need to make an office visit, with the subsequent optimisation of healthcare resources and a likely decrease in costs.

These helpful tools can be used not only in primary care (PC), but also in hospital care for the followup of healthy children and at-risk patients.

The use of technology is supported by international health organisations1 and also the World Health Organization (WHO), which has noted “the potential impact that advances in information and communication technologies could have on health-care delivery” in its report on eHealth(Document EB115/39).2

Spain also had to adapt and update some of its regulations to allow the transition from the “paper era” to the “digital era”.3–5 Technological progress is changing the way we communicate. According to 2005 estimates, about 90 million individuals searched for health-related contents online, and the number of health e-commerce consumers grew from 11 to 55 million today. Users most commonly sought direct access to a doctor, and accuracy, depth and credibility in website contents.4

There are challenges that need to be overcome, involving, for example, the acceptance on behalf of healthcare professionals, infrastructures, training in new technologies, the interoperability of clinical information systems, etc. This calls for a concerted effort on the part of consumers, professionals, and administrators.1

We believe it necessary to present the characteristics of the healthcare centre where the study was conducted at the time of the study: it served a population of 5308 patients assigned to four doctors; the mean number of visits per month per paediatrician was 572.67, and the mean number of nurse visits was 265.5. The waiting time to schedule an appointment with the doctor was 3 to 4 days, and it was 1 to 2 days for nurse visits. The waiting time to schedule a routine visit as part of the well-child programme was one to two months approximately, so priority was given to newborn checkups (newborn appointment at 15 days, appointments could be rushed when needed). The time spent in the waiting room of the paediatrician’s office for on-demand appointments with the doctor was of 30 to 45 minutes in the morning shift and of 1 hour to 1 hour and 15 minutes in the afternoon shift.

In light of these data, our aim was to determine whether new technologies can be efficacious and efficient tools in PC for the monitoring, followup and prevention of common health problems in healthy newborns and infants in the first six months of life. We wanted to determine whether there was a reduction in the number of on-demand paediatrician and nurse visits and to learn the extent to which new technologies are accepted by the population.

We did not find similar studies in the field of PC paediatrics, although the Autonomous Community of Madrid has a completely free platform that is easily installed and is known by most healthcare professionals; we believe that their large caseloads have not facilitated their use and promotion so far.

Study design: pilot case-control study on the implementation of a new health care tool compared to traditional PC followup. The study performed a longitudinal followup of six months for each patient. The inclusion criteria were having access to the Internet and signing the informed consent form. The withdrawal criterion consisted in the minor’s guardian choosing to stop participating.

Data collection employed the electronic records database for PC in Madrid to reflect the data generated by new technologies; we obtained administrative permission to switch the IDC-9 code for non-sick visits with “telemedicine”.

The study was registered with the Agencia Española de Protección de Datos (Spanish Data Protection Agency), as required by the Organic Law for Data Protection (LOPD) and was approved by the local ethics committee and the ethics committee for clinical research (Comité Ético de Investigación Clínica [CEIC]) of the Hospital 12 de Octubre (Madrid). We obtained the rights to use the images in the webpage. Participation was at will, voluntary and free, with no associated costs or remuneration.

The study lasted a total of two and a half years. The control group included 57 patients, and another 57 were included in the intervention group. The data on sociodemographic variables and identified diseases is presented in Tables 1 and 2.

The analysis of the frequency of doctor visits showed a difference in the median number, which was 2 in the intervention group and 4 in the control group (P = .001) (Figure 1). The results pertaining to nurse visits also showed a difference, with a median of 0 for the intervention group and of 1 for the control group (P = .001) (Figure 2). 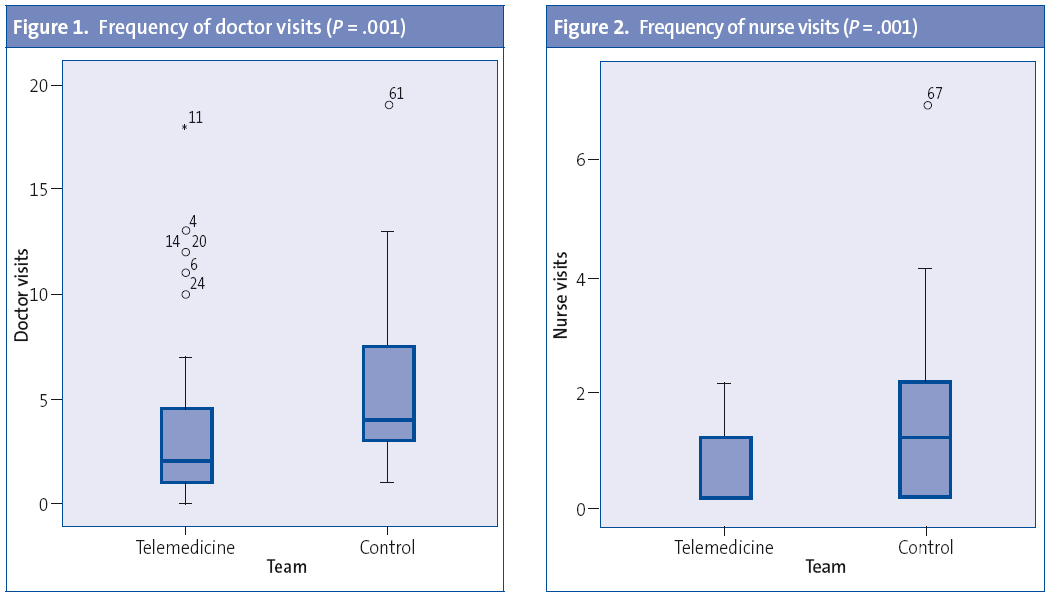 The percentage of continued breastfeeding through six months of age was 18.60% in the control group and 36% in the intervention group.

We conducted a survey of the relatives of the newborn before and after the intervention, the results and statistical significance of which are shown in Table 3.

The results for the rest of the health professionals at the healthcare centre where the study was conducted were the following: 60% of the nurses and 61.54% of doctors would like to use new technologies in their practise; and 80% of nurses and 69.23% of doctors think that they can save travel and resolve concerns.

We observed that the sociodemographic distribution, educational level and identified diseases were homogeneous across the control and the intervention groups.

A very important finding was the reduced number of on-demand visits to paediatricians by the intervention group, a difference that was statistically significant (P < .05); which was probably associated to large case loads, overcrowding, and waiting times in paediatric PC offices. We also think that technology might reduce management costs by 25% to 30% by cutting down inefficient, redundant or unnecessary actions, as observed in a study conducted in the United States.4

Followup by means of new technologies allowed us to promote exclusive breastfeeding, which was accomplished in 36% of the intervention group compared to 18.6% of the control group; while we did not find a statistically significant difference, we observed a considerable increase in the percentage, resulting in compliance with the general policy on the nutrition of infants and young children, which states that all PC hospitals and centres have to adopt and implement efficacious strategies for the protection, promotion, and support of breastfeeding such as those included in the Iniciativa Hospital Amigos de los Niños,6 which supports breastfeeding as the natural nutrition for infants and young children to ensure their optimal growth, development, and health.7-9

We believed that knowledge of the safe position for infant sleep was important, so we carried out a survey and observed a change in the use of the stomach or side positions from 21.05% to 0% following our intervention that reached statistical significance. Placement on the back or side changed from 73.68% to 100% in the intervention group, with P < .005. We were able to demonstrate an improvement in the continuity of medical care and the care of the infant. The attitude of the guardians as to their intention to travel to the emergency room to address concerns about growth or breastfeeding in the early months of the infant’s life changed from 58.62% to 0% in the intervention group, a statistically significant difference that confirms that the population has been educated on the appropriate use of healthcare resources.

The satisfaction was 86.21% for consultations made by means of new technologies, 79.31% for telemedicine talks, and 96.5% for the secure access to the website; we interpret this as a high degree of acceptance by the population under study.

We also thought it was very important to know the opinion of the other health professionals working at the healthcare centre regarding the new technologies, and found the following: 60% of nurses and 61.5% of doctors would like to use new technologies and telemedicine in their practise. Also, 80% of nurses and 69.2% of doctors consider that this is a low-cost tool that saves travelling and can resolve concerns; with these data at hand, we venture to say that the barriers to the acceptance of healthcare professionals are progressively disappearing.

We believe that eHealth tools offer an efficacious and efficient alternative in PC for the monitoring, followup and prevention of common problems in health newborns and infants up to six months of age. Furthermore, the new technology tools, such as web pages, social networks, and telemedicine resolved concerns about breastfeeding, nutrition and vaccines.

The telemedicine application contributes to the continuity of medical care and to the preventive care of the newborn, leading to a reduced number of on-demand visits to the paediatrician and the nurse, and probably to a reduction of care costs.

Acceptance of new technologies has reached levels exceeding 85%, and more than 75% of the population under study approves of the use of telemedicine.