Introduction: acute appendicitis in children under 4 years old shows a high incidence of complications due to a late diagnosis such as peritonitis, in comparison to other ages. This study is aimed to find data in order to achieve an early diagnosis to reduce their incidence.

Results: eighty-two patients were enrolled, and a 1.5:1 ratio of male/female was found, which varied by age group, where 85.7% of female in children under 2 years and 43.2% between 2 and 4 years were found. The most frequent symptoms were progressive abdominal pain, vomiting, anorexia and malaise. The most common signs were tenderness in right lower quadrant, rebound pain and fever. There were no differences in laboratory, radiological or anatomical pathology findings.

Peritonitis was more frequent in patients with fever >38.5 °C on the first day (OR 3.36; p=0.009). No significant relationship was observed between age and increased risk of peritonitis.

Conclusions: acute appendicitis in children under 4 years is still a diagnostic challenge. Symptoms and signs are similar to classic appendicitis, though most frequently associated malaise and high fever and short evolution. Fever is related to a three times higher risk of appendical perforation and peritonitis, especially in women younger than 2 years.

Acute abdominal pain is a frequent reason for visits to primary care paediatrics departments, and has an extensive differential diagnosis that ranges from common mild pathologies to life-threatening conditions. Some of the features of acute appendicitis in children are also typical of adult presentations,1,2 despite the anatomical or dietary differences that make the pathophysiology of these two groups different.3-5 However, the younger the patient, the more common it is to observe complications characteristic of a delayed diagnosis, such as peritonitis secondary to perforated appendicitis, especially in children younger than 4 years.6-8

The objectives of the study were:

We conducted a retrospective study that run from December 2006 to April 2012. The study included children younger than 4 years seen at the paediatric emergency department of a tertiary university hospital with a diagnosis of acute appendicitis confirmed by histological examination of the appendix after surgery. We obtained the data from the medical records of patients with a discharge diagnosis of acute appendicitis (ICD-10 K35.9) from the hospital’s coding unit. We excluded cases in which appendectomy was performed for suspected acute appendicitis if they turned out to be nonpathological (“white appendectomies”), as well as cases in which prophylactic appendectomies were performed in the context of another intervention. The study did not exclude patients that were diagnosed in other centres and eventually transferred to our hospital for surgery.

We collected data for demographic, clinical, laboratory, radiological, ultrasonographic, and anatomical pathology variables, and on the length of stay and postoperative complications, data needed to apply some of the validated scales for diagnosing appendicitis in children, such as the Pediatric Appendicitis Score (PAS) developed by M. Samuel.9-11

When it came to the evolution of the disease, we collected the duration of symptoms from the reported day of onset to the day of diagnosis, as well as any visits to the hospital that occurred in this time interval. We collected the length of stay in days from admission to discharge, including both. The follow-up period comprehended the time from the day of diagnosis to the time of the study.

We classified complications as early if they occurred in the first three days postsurgery, and late if they developed afterward.

The study included a total of 82 patients that met the eligibility criteria. The mean age was 36.8 months (range, 7–47 months) with a median of 38.5 months. We found no significant differences in the various variables between age groups. The sample included 48 boys and 34 girls, resulting in a 1.5:1 ratio. This ratio varied depending on age, with girls accounting for 85.7% of patients under 2 years of age and 43.2% of patients between 2 and 4 years of age.

The mean length of stay was 9 days. The median time to diagnosis was 2 days since the onset of symptoms in children younger than 2 years, and extended to 3 days for older children. Of all patients, 57.7% were diagnosed in their first visit to the hospital, 30.7% during a second visit, and up to 11.5% required three or more visits to get diagnosed.

Table 1 presents the documented symptoms and their respective frequencies. The most frequent symptoms were progressive abdominal pain, vomiting, anorexia, and asthenia. 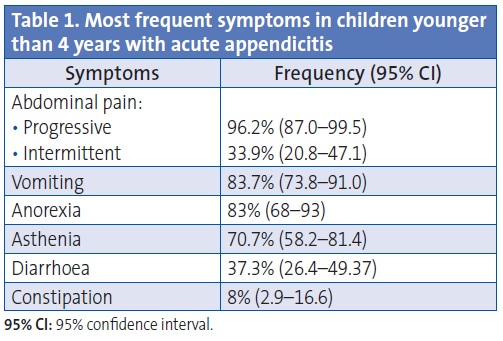 The most frequent signs were pain upon palpation of the lower right quadrant or the right iliac fossa (RIF), abdominal guarding, and fever (Table 2). In regards to the latter, we ought to note that 74.1% of patients presenting with high fever (>38.5 °C) had developed it on the day of the onset of symptoms. 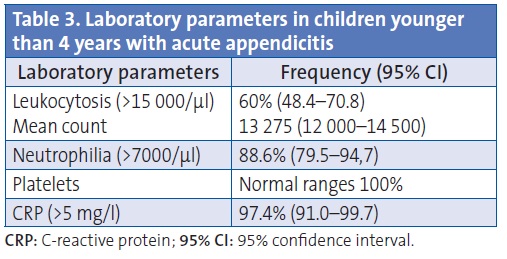 The absence of some data in the medical records, such as dysuria or abdominal pain upon performing the Valsalva manoeuvre, precluded the correct application of the PAS, so we could not include this score in our analysis.

When it came to imaging tests, the documentation showed that plain radiography of the abdomen showed abnormalities in up to 75% of patients, while the abdominal ultrasound was abnormal in 88.8%. The most frequent ultrasound findings were free fluid/peritonitis (26.9%) and signs of inflammation (23.8%).

Lastly, peritonitis was documented in 58.4% of the patients (95% confidence interval [95% CI]: 46.6–69.5). Patients who developed a high fever on the day of onset had three times the risk of developing peritonitis (odds ratio [OR]: 3.3; 95% CI: 1.2–9.5; p=0.009). The rest of the parameters under study showed no statistically significant relationship with peritonitis. Also, abdominal abscesses were documented in 28.6% of the cases. There were no deaths in the sample under study.

The data obtained in our study are mostly consistent with those found in other case series of similar characteristics.12-15 Sakellaris et al studied a sample of 122 children younger than 5 years diagnosed with appendicitis, which they classified as complicated or uncomplicated depending on the presence of appendiceal perforation at surgery. In their study, the symptom that was present in almost all cases was diffuse abdominal pain accompanied by fever, nausea and vomiting, all of which developed in at least 75% of the patients. Nearly half of the patients presented with anorexia and diarrhoea. Less typical symptoms included dysuria, cough, and odynophagia (as the only symptom in 11%). Unlike what happened in our series, asthenia was only observed in 6%. The signs found most frequently in complicated appendicitis cases were abdominal guarding (slightly higher in complicated versus uncomplicated appendicitis, in 76% and 64% of cases, respectively), signs of dehydration (in up to 59%), abdominal distension (30%), rebound tenderness (in up to 90% of complex cases), decreased bowel sounds and tachycardia. Another circumstance that contributed to the development of complicated forms of appendicitis was the delayed identification of symptoms beyond the first visit. Up to 66% of the patients that had sought care at a prior time had been diagnosed with a different condition, and had even been treated with antibiotics.

An unexpected finding in our study was the predominance of the female sex in patients younger than 2 years that has not been found in other samples, which may have been due to the small sample size. The fact that children younger than two years are diagnosed earlier than the older children in our sample may be due to the clinical importance of a high fever of rapid onset accompanied by asthenia in these patients that are vulnerable in themselves, which leads to suspicion of a severe underlying pathology and admission to the hospital, even if the clinical signs and symptoms are not sufficient to make a definitive diagnosis.

As for diagnostic tests, previous case series are consistent in showing low specificity for the laboratory parameters, although the absence of leukocytosis and neutrophilia makes the diagnosis of appendicitis improbable. Likewise, imaging tests do not allow a definitive diagnosis in every case. Nevertheless, both plain abdominal radiographs and abdominal ultrasound scans are abnormal in up to 75% of patients with acute appendicitis.

On the subject of the increased risk of developing complicated appendicitis of children younger than 4 years, several studies have focused on appendiceal perforation and subsequent peritonitis.3,12,16,17 Kara et al reported the development of appendiceal perforation in up to 86% of children younger than 1 year, a frequency that decreased to as low as 49% in children aged 4 and 5 years. Abscess formation was associated with leukocytosis, fever, and the presence of faecalith. Up to 66% of children younger than 3 years in this series had perforation at the time of surgery.Furthermore, their symptoms developed earlier, were more severe, and lasted longer, and the incidence of postoperative complications was also higher in this group.

Postoperative complications were infrequent in all the case series we reviewed, and the most common ones were abscess formation and skin infections. We did not find data on mortality.

The scarcity of the data required for the application of the PAS evinces the lack of standardisation in the management of abdominal pain in cases of suspected appendicitis, as the management does not systematically gather information for all the items in the different validated scales, in addition to the limitations characteristic of a retrospective study. At any rate, the scales validated for appendicitis in children are not specific in children this young.

The low incidence of this entity in this age group and the nonspecificity of some of its symptoms result in a low level of suspicion on the part of the clinician and in delayed diagnosis, with the consequent delay in therapeutic intervention.

The diagnosis of acute appendicitis in children younger than 4 years continues to be a challenge. The high incidence of bowel perforation in this age group, as well as the development of abscesses and other postoperative complications, motivates the search for tools to aid in its early diagnosis.

The signs and symptoms in this age group are similar to the classic signs and symptoms of appendicitis, although asthenia and high fever of short duration is found often in this group, as well as three times the risk of bowel perforation and peritonitis, a finding that is more frequent in girls younger than two years.

Laboratory parameters help rule out the diagnosis, but their specificity is low. Similarly, imaging studies are usually abnormal, but seldom conclusive.

Finally, it is necessary that data for the parameters used in some of the scales for the diagnosis of acute appendicitis in children be collected in a systematic and standardised manner, even though there are no studies yet validating their use in this particular age group.