Telephone triage in Primary Care. Analysis of the implementation of a model

Purpose: the aim of this study is to know the response capacity of the nurses’ telephone triage and users’ satisfaction.

Materialand methods: among the calls received for consultations from February 15 to June 30 of 2011, the nurse collected demographic variables, history of chronic diseases, reason for consultation, symptoms of the patient and subsequent action. Three to 10 days later, a satisfaction survey on the care received was conducted. Data were entered in Access Office 2007 and analyzed using SPSS 19.0.

Results: the telephone triage represents 15.5% of total consultations attended in the area of pediatrics. Calls analyzed: 663; 52.8% were male. The mean age was 4.9 years. Immigrant population: 4.5%. Chronic illness: 5.3%. The duration of symptoms was 2.9 days (SD: 2.8). Clinical consultations: 80.3% (23.8% fever; 15.4% cough; 9.1% sore throat). Nonclinical consultations: 19.7%. The nurse referred 72.7% of the cases to the pediatrician the same day, 10% were scheduled an appointment and 17.3% of cases were resolved without intervention of the pediatrician. Among nonclinical visits, 83% resolved without requiring clinical intervention of the pediatrician versus 9% in the case of clinical visits. Calls considering useful the nurse’s advice were 93.4% and 93.9% did not require to be treated in any other service.

Conclusions: the resolution of non clinical visits without pediatrician’s intervention was very high compared to clinical visits. The user satisfaction was high.

The daily practise of paediatrics in a healthcare centre involves many different aspects, chief among which are the delivery of medical care, health prevention and promotion efforts, and organisational and administrative tasks. Telephone consultations are an increasingly important mode of healthcare delivery1,2.

Numerous studies agree that there is an increased demand for paediatric emergency services, both in primary care and in hospital settings, a phenomenon that has been observed in several developed countries. This rise in demand is mostly due to unjustified consultations3,7,8. The institution of a robust telephone triage system could help reduce the number of these consultations while ensuring the correct management of patients with potentially serious conditions1,2. For this reasons, our centre set up a nurse telephone triage system to assess how urgently care is needed in each case, and to counsel the callers on how to manage the condition.

The aim of this study was to ascertain the resolution rate of a nurse triage system in the paediatrics office of a healthcare centre, and to assess the level of satisfaction of the users of this service.

The Villabona healthcare centre in Guipuzcoa serves 15 500 people. The paediatric population aged 0 to 14 years, consisting of 2300 children, is served by two paediatricians and two nurses that work from 8 am to 3 pm. The population is of middle socioeconomic status.

The study included all paediatric patients that made telephone consultations in the period ranging from February 15 to June 30 2011, which resulted in a sample size of 663. When performing the satisfaction surveys, we excluded all calls for which we did not succeed in establishing contact after attempting to call at three different times of the day, so the final sample size was reduced to 462.

The paediatric nurse did not have any prior knowledge of paediatric care other than that gained from actively participating in the practise of the two paediatricians in the 2 to 3 months that predated the introduction of the triage system. This nurse telephoned the family and administered a questionnaire developed specifically for the study that asked about demographic variables, history of chronic disease, the main reason for the consultation, and the symptoms experienced by the patient. After this telephone interview, and based on a series of initial protocols that have since been modified according to the guidelines of the Sociedad Española de Urgencias Pediátricas (Spanish Society of Paediatric Emergency Services [SEUP]), the nurse determined whether to refer the patient to the paediatrician that same day, schedule an appointment with the paediatrician for a later date, or resolve the concern herself without referring the patient to the paediatrician. The intervention chosen by the nurse was recorded in the patient’s chart.

The volume of received calls accounted for 15.5% of the total consultations to the paediatrics service of the healthcare centre. In the period under study, 663 consultations were made over the telephone. Of these calls, 52.8% concerned boys and 47.2% concerned girls. The mean age of the children served was 4.9 years (standard deviation [SD], 3.8), ranging from 5 days to 14 years. As seen in Figure 1, 30.1% of the calls involved children between 1 month and 2 years of age, closely followed by the group of children aged between 2 and 5 years, and children aged between 5 and 10 years. 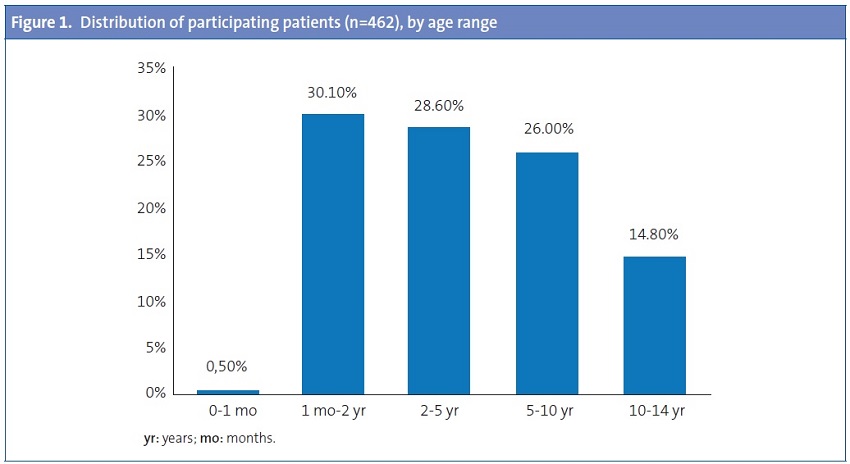 Of all received calls, 4.5% concerned the immigrant population, and 5.3% a chronic condition, which was nearly always asthma.

Calls made between 8 am and 9 am accounted for 56.9% of the total number of telephone calls. The day of the week that registered the highest number of calls was Monday (22.25%).

The mean duration of the symptoms at the time of the consultation was 2.9 days (SD, 2.8), with duration ranging from a few hours to 30 days.

In 72.7% of the calls, the nurse scheduled a same-day appointment with the paediatrician, in 10% a routine appointment was scheduled for another day, and in 17.3% the nurse managed the reason for the consultation without needing to refer to a paediatrician (Figure 3). These figures vary depending on the duration of the symptoms, as the percentage of the consultations resolved by the nurse without intervention by

Of the consultations made for a medical reason, the nurse resolved the concern without consulting with a paediatrician in 9% of the calls; 85% of the callers were referred to the paediatrician for a same-day appointment, and 6% were scheduled for a routine appointment at a later date. The remaining 11.2% of callers did not have a clinical concern (consultations concerning child care, concerns about drugs, administrative issues …). The nurse resolved the concern in 83% of the clinical consultations, referred the caller to the paediatrician for a same-day appointment in 10% of them, and scheduled a routine appointment for a different day in 7% of these calls.

The most frequent reason for consultation in patients who were scheduled to meet the paediatrician on the same day was fever (28%), followed by cough (18.1%) and painful swallowing (4.8%). The consultations that most often led to a scheduled referral to the paediatrician were those made to monitor the evolution of disease in patients (22.2%). Age (P = .241), sex (P = .574) and immigration status (P = .290) did not influence the nurse’s decisions.

Children with underlying chronic diseases accounted for 5.3% of the calls, with conditions including asthma, epilepsy and recurrent urinary tract infections among others. Consultations that involved medical concerns in this group of patients led to 75.9% of them being referred to the paediatrician for a same-day appointment, with no difference (P = .281) in the frequency of referrals between them and the rest of the children (72.5%).

Phone calls add considerably to the workload of the two paediatricians in the centre. Before the introduction of the triage system, consultations managed over the telephone accounted for 15.5% of the total consultations in this healthcare centre, a figure that was slightly higher than figures reported in other studies (6%)1 and that in our case did not increase as a result of implementing the triage programme. We believe that telephone triage is a useful and agile tool to facilitate and expedite the management of some administrative, child care, or medication concerns,1,5,6 which in our case accounted for 11.4% of the consultations. Some studies estimate that the introduction of an easy and economic system like a telephone triage programme can reduce the number of visits to the paediatrician by up to 8%6.

The highest volume of calls for telephone consultations was registered on Mondays between 08:00 and 09:00 am, although this is different from what is reported in another study, in which the days with the highest volume of calls corresponded to the weekend1. Consistent with the medical literature, no differences were found between the sexes. The symptom that was the most frequent reason for consultation was fever, which was also consistent with the literature1-3. There is more variability in the second most frequent reason for consultation, which in our case was cough, and in other studies is gastrointestinal symptoms1,11.

The predominance of calls concerning patients with ages below 2 to 3 years (30%) is a finding consistent with what is reported in the reviewed literature, reaching 50% in some of the studies2,3.

During the period of the study, the most common intervention of the telephone triage nurse in our healthcare centre was same-day referral to the paediatrician, which occurred in approximately 72.7% of the calls. The percentage of calls resolved without a paediatrician’s intervention was higher for patients in whom the onset of symptoms had occurred within less than 24 hours.

We ought to emphasise the responsibility attached to conducting a telephone triage, but there is an increasing number of protocols to help differentiate the signs and symptoms that require attention in the short term from those that do not1,2,11. This accounts for the low resolution rate of clinical consultations, as the difficulty inherent in the physical absence of the patient and the inability to perform diagnostic tests make it harder to resolve this type of concerns over the phone. To minimise potential risks, a set of criteria must be met: having qualified personnel, updated medical protocols, keeping records of basic data, confidentiality, and referral to the paediatrician whenever any doubts emerged1,5. A study in Norway stressed the importance of ensuring that the advice given was well understood, for which they recommended asking the callers to repeat the information given to them at the at the end of the call9,10.

Over 90% of the callers reported being satisfied with the service, a figure that we believe is relevant, and which is consistent with those reported in other studies1,7.

One of the limitations of this study is that the nurse had little experience in telephone triage, as this system had been introduced recently in the healthcare centre. Another limitation was the reduction in the sample size after the satisfaction survey due to loss to followup.

In order to assess the performance of this telephone triage system, we need to make comparisons with other studies, evaluate its cost, evaluate the safety of the advice given over the phone, and assess the degree of satisfaction of the population2,3,8,10.

Lastly, it must be taken into account that this study was conducted a few months after the introduction of the telephone triage system. Thus, there is the option of analysing the same data at a later time to compare the results with those obtained in the current study.