Objective: to determine the incidence of hand washing in parents as a preventive factor in the spread of viral respiratory infections in children under two years assigned to an urban pediatric basic health area affected by catarrhal symptoms during the influenza vaccination campaign.

Material and methods: from 230 children under two years included in the basic health area attending the Well Child program, 51 consulted during the influenza vaccination campaign (October 2011) by catarrhal symptoms.

Results: fifty-one children were included, 23 male and 28 female. From the clinical point of view, 33 cases were afebrile and only 18 had fever, runny nose 100%. The clinic diagnosis in 44 cases was nasopharyngitis, acute bronchitis in 5 cases and obstructive bronchiolitis in 2 cases. No family history in 19, however 32 cases had a family member with catarrhal symptoms. As for the performance of hand washing as a preventive measure, 34 cases said they did not comply with this measure, only 17 cases did, despite the recommendations.

Conclusions: while recognizing the importance of hand washing as a preventive measure for respiratory infections and being included among the recommendations offered in the well child program, only 33% of the population of our study reported washing hands. This recommendation should also be included in consultations on demand during the influenza season to encourage compliance.

During the autumn and winter months, parents often ask for means to prevent their children from contracting respiratory infections. This could be an appropriate time to underscore the importance of hand-washing in preventing the transmission of viruses.

Respiratory viruses tend to cause mild diseases, although they may lead to outbreaks due to their high transmission rates1. The propagation of respiratory viruses among young children is particularly high, with respiratory infections being the leading cause of morbidity among infants in our environment2. In late autumn and all through the winter, children younger than two years are at risk of contracting infections by respiratory syncytial virus, adenovirus, human metapneumovirus, influenza virus or parainfluenza virus, among others3,4. These viruses can spread through airborne respiratory secretion droplets or direct contact of the hands with these secretions.

The transmission rate of these viruses, and of rhinovirus in particular, is high, and humans are their reservoir; with respiratory tract secretions being the source of person-to-person contagion. The propagation of viral respiratory infections is prevented, above all, by simple hygiene measures, chief among which are hand-washing and avoiding contact with individuals experiencing catarrhal symptoms5. Among other measures, prevention is founded on encouraging hand-washing with soap and water for 30 seconds before manipulating an infant, keeping infected individuals away from the child, and avoiding passive smoking and the sharing of silverware or nipples6,7. These measures could lower disease transmission from children to other members of the family. The use of transmission barriers, isolation, and hygiene measures could be efficacious to contain outbreaks of respiratory viruses, especially in the paediatric population7.

The goal of our study was to evaluate the rate of hand-washing compliance, and to assess the impact of this measure, which is one of the preventative recommendations offered in the PSI (Programa de Salud Infantil, healthy child programme). The efficacy of hand-washing is corroborated by existing protocols in healthcare institutions on the importance of this technique and compliance with it8.

We analysed the data obtained in a Paediatrics practise located in the Málaga Healthcare District.

Our methodology consisted in conducting a survey during appointments on demand to assess the effect of hygiene measures on the prevention of respiratory diseases before the beginning of the bronchiolitis and influenza season, with the purpose of determining whether those measures were applied and to encourage compliance with them.

Out of the total of 230 children less than two years of age served by this paediatric practise under the PSI, we included in the study 51 who came for an appointment during the influenza vaccination campaign (October 2011) due to catarrhal symptoms.

We collected data on the age, sex, reason for the visit (runny nose, coughing, nasal congestion), the presence of fever, whether someone in the family environment had a concurrent catarrhal condition, and whether household members and caregivers washed their hands before interacting with the child.

We performed a descriptive statistical analysis, which included the calculation of measures of central tendency and dispersion for quantitative variables, and absolute and relative frequencies for qualitative variables.

Following a comprehensive physical examination, the clinical diagnosis was rhinopharyngitis in 44 cases (86%), acute bronchitis in five chases (10%), and bronchiolitis in two cases (4%).

As for the presence of someone with some type of catarrhal condition in the family environment, no family members had a respiratory condition in 19 cases (37%); however, there was at least one family member with a concurrent catarrhal disease in up to 32 cases (63%). Of those cases, 6% corresponded to the grandparents; 9% to a sibling younger than three years of age; 31% to a sibling three years of age or older; 34% to one parent (father or mother); and up to 21% to both parents (father and mother).

Last of all, when it came to household members and caregivers performing hand-washing as a preventative measure prior to interacting with the child, up to 34 cases (67%) reported non-compliance with this measure, which was only applied in 17 cases (33%), despite recommendations (Fig. 1). 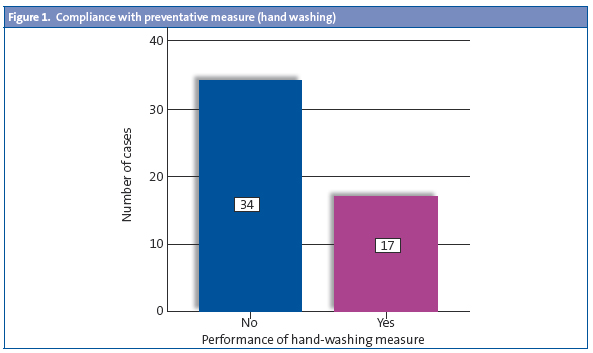 The measures to prevent the transmission of respiratory diseases, besides barrier methods (face masks, gloves…), include efficacious strategies like frequent hand-washing with or without antimicrobial agents, and instructing and educating family members on hand-washing. Improved hand hygiene is one of the most significant elements in the effort to provide safer healthcare services, as it protects the patients from the deleterious consequences of avoidable infections, and is thus a priority for every healthcare professional. For this reason, multiple programmes regarding patient safety and hand-washing have been developed in the Healthcare Service of Andalusia, in accordance with the guidelines of the World Health Organization.

Recent studies show that the best treatment for respiratory infections is their prevention and advocate hand-washing as an efficacious strategy to eliminate respiratory viruses9,10.

In the population that we studied, despite the encouragement of proper hand-washing technique by the PSI and the awareness of its importance in preventing the transmission of catarrhal diseases, only 33% of respondents reported applying this measure.

The recommendation of hand-washing for preventing transmission of catarrhal conditions could be made routinely in appointments on demand during the influenza campaign to foster compliance with it.

As we could see, the verbal information provided in the context of the PSI was not enough, as it resulted in low-level compliance among those patients that sought care for symptoms of respiratory infection in October 2011. It would be interesting to try giving written information on hand-washing technique and its efficacy in preventing respiratory infections both in appointments on demand and in PSI visits to foster compliance.

Furthermore, this is a simple, easy, and inexpensive measure, and compliance with it could result in economising on healthcare resources. Recurrent infections in infants could be prevented. Thus, this could be an easy-to-apply measure that would have a positive effect in the home, the school, and the working environments. Although hand-washing is a simple technique, the low rates of compliance compel us to be more insistent in recommending it.

The authors declare that they have no conflict of interest in regard to the preparation and publication of this article.