Objective: to assess the efficiency of an educational intervention on lifestyle habits to reduce the body mass index in adolescents.

Patients and methods: year-long longitudinal clinical study carried out in 48 Primary Care Centres in Catalonia. The participants were 174 adolescents between 10 and 14 years of age who were either overweight or obese, 87 were randomly assigned to the intervention group and 87 to the control group. The intervention was educational in nature (about dietary habits and physical exercise) and was performed during the first visit, and at follow-ups at 1, 3, 6, 9 and 12 months. Outcome variables: changes in dietary habits and physical exercise, changes in body mass index (BMI) and abdominal perimeter.

Conclusions: the educational intervention was effective in reducing BMI and the abdominal perimeter in both groups. There was improvement in dietary habits, but not in the habit of physical exercise.

The prevalence of being overweight and obesity has increased drastically in the last three decades, especially in developed countries. The prevalence in Spain according to the EnKid study of 2 to 25 year old subjects is of 13.9% for obesity and 12.4% for being overweight1. Other authors have reported similar prevalences of overweight and obesity2-5. These conditions also have become public health concerns and are the most frequent chronic conditions in childhood6-8. Obese adolescents are at risk of continuing to be obese as adults, and of developing other diseases such as hypertension, hyperlipidemia, metabolic syndrome, type II diabetes mellitus, cardiovascular and hepatobiliary disease, cancer, and psychosocial complications that can ultimately lower life expectancy9.10.

The experts consider that the increase in prevalence is not due solely to genetic factors, but also to changes in lifestyle (dietary and physical exercise habits) associated to a higher intake of calories and a lower consumption of energy12. In order to improve the prevention and management of obesity, we need to work with adolescents and their families and help them change their habits13-16.

The assessment of overweight and obesity is done by means of the body mass index calculation (BMI) (weight in kilograms divided by the height in metres squared) and measurement of the abdominal perimeter (AP), an indirect parameter of the distribution of abdominal fat. Primary care (PC) visits provide the ideal setting to promote health and preventative measures17, but there is a lack of clear evidence supporting the benefits of health education18-21.

The purpose of this study is to determine the efficacy of an educational intervention in reducing the BMI of overweight or obese adolescents 10 to 14 years of age served at PC centres in Catalonia.

The study consisted of a multi-centre intervention trial with obese and overweight adolescents that were seen in PC practices in Catalonia approved by the Ethical Committee for Clinical Research of the Institut d’Assistència Sanitaria (CEIC-IAS) and registered in the International Standard Randomised Controlled Trial Register as number ISRCTN35399598.

Inclusion criteria: adolescents 10-14 years of age of both sexes diagnosed as overweight (BMI between the 85-95 percentiles, depending on age and sex) or obese (BMI percentile > 95).

Sample size: assuming a BMI standard deviation (SD) of 2.5, an alpha risk of 5%, a statistical power of 80% and a potential attrition rate of 1%, we needed a sample of 110 adolescents per group to detect a 1-point difference in BMI among study groups.

Recruitment: the objectives of the study were explained, and participation in it was offered to any adolescent meeting the inclusion criteria and the corresponding companion (parents or tutors) that attended the PC paediatrician visits. We obtained the informed consent of those who chose to participate, and randomly allocated each adolescent to one of the study groups based on a sequence of random numbers generated in a centralised manner from the Research Unit that participated in the study. Sociodemographic and clinical data were gathered during the first visit. The study lasted one year, and ended in December 2007.

Intervention: the adolescents of the intervention group (IG) made an initial visit plus five more in the follow up months, 1, 3, 6, 9 and 12. Adolescents in the control group (CG) made an initial visit and a final visit at 12 months. During the initial interview, the health education intervention was carried out with the adolescent in the presence of the parents or tutors to involve them both, and written advice was provided based on national and international recommendations11.16.22 (Appendix I). In each visit, the compliance with the recommendations made at the beginning was assessed. In the first and last visits, the participants filled out a questionnaire about dietary habits and physical exercise.

Dependent variable: evaluation of the BMI and the associated z-score. The BMI z-scores were calculated using the growth charts published by the World Health Organization.

Independent variables: the AP and the associated z-score, calculated using the values published in the EnKid study1; dietary and physical exercise habits, recorded in a questionnaire developed specifically for that study.

Statistical analysis: the data from the study groups were compared using the χ2 test for qualitative variables, and Student’s t-test for independent data or the Mann-Whitney U test to analyse quantitative variables depending on whether the data did or did not meet the requirements for the parametric tests. Changes in the dependent variable between the first and last visits according to study groups were assessed using the General Linear Model for repeated measurements. The data were analysed following the intention to treat principle. Results were considered statistically significant for p < 0.05. The statistical analysis was performed using the software package SPSS® 15.0.

The initial sample included 211 adolescents, of which 37 (17.5%) were excluded because they failed to meet inclusion criteria (Fig. 1). 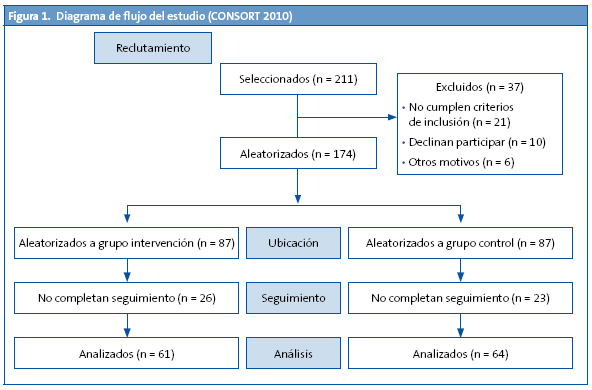 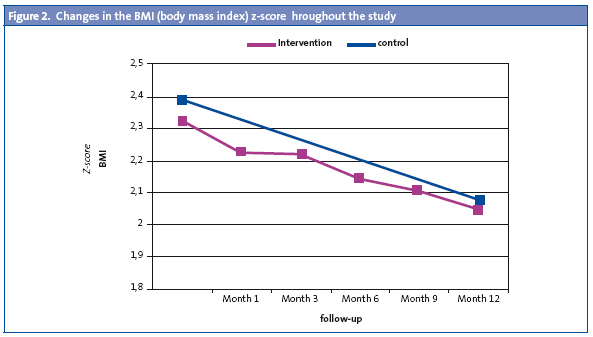 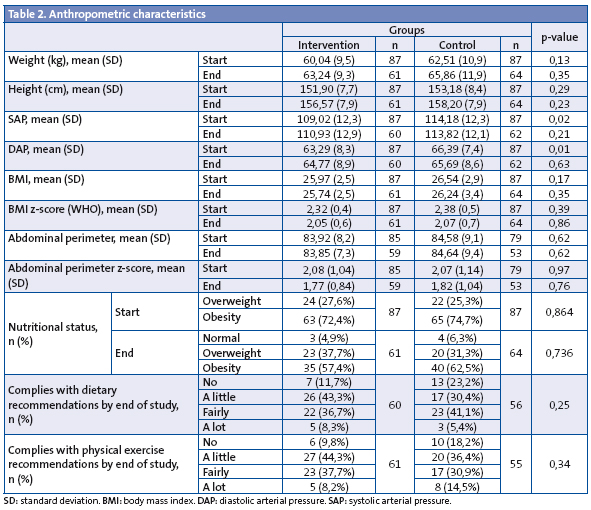 The compliance with dietary and physical exercise recommendations was greater in the IG than in the CG (88.3 vs. 76.8% and 90.2 vs. 81.8%, respectively), with no significant difference between groups. At the beginning of the study, participants in the CG consumed more pieces of fruit on a daily basis (p = 0.028) and more rice and pasta on a weekly basis (p = 0.010), with the same trend showing for the latter at the end of the study (p = 0.015) (Table 3). At the beginning, 3.4% of the adolescents did not have breakfast, a proportion that had dropped to 0.8% by the end of the study. 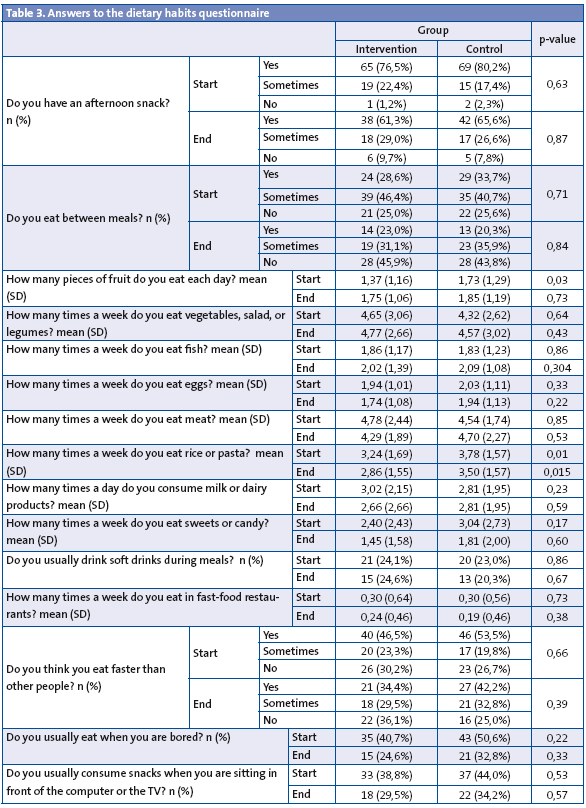 The socio-demographic data did not show any significant differences between groups (Table 1). 90% of participants had been born in Spain, 79.5% had two Spanish parents and 72.2% lived with both parents. The educational level of most parents fell between primary and secondary school. Out of all the data, it is worth mentioning that there is a family history of obesity in 48.85% of the participants, and that 20.7% had followed a weight management programme in the past.

In both groups, IG and CG, the BMI and AP z-scores decreased significantly, with no significant differences between groups. At the end of the study, there was an increase in the percentage of overweight adolescents in relation to the number of obese adolescents. Our hypothesis was that the IG would show a higher decrease in BMI, since intense efforts were made to motivate and engage the family, an important factor to achieve compliance with educational recommendations24.25. The three possible explanations are: first, the Hawthorne effect26: all patients knew that they were participating in a clinical study; second, the possible influence of the different initiatives of the Spanish Ministry of Health and Consumer Affairs in relation to overweight management (NAOS Project)16, and third, the CG received an initial intervention that could have had an impact. An Australian study in which the CG was referred to a 12-month waitlist and was also given a pamphlet on overall healthy habits showed similar results, with a significant decrease of the group’s BMI z-score matching that of the two IG, but contrary to what happened in the Obescat study, there was no reduction in the AP z-score27.

A strong point in the Obescat study is that it was a multi-centre study involving centres all over Catalonia, which gives external validity to the study. But at the same time this could be considered a weakness, since it made it difficult to hold the periodical meetings that are advisable to ensure a homogeneous research methodology across researchers, a disadvantage that was alleviated by the use of online tools.

There was an elevated attrition rate (38.2%), which could be partially accounted for by the fact that several paediatricians were transferred from their original healthcare centre to another. Some authors report even higher percentages of participant loss at 12 months (43-47%)28.29. In the 2009 Cochrane back review30, comprehending 54 studies based on educational interventions, participant loss rates ranged from 7 to 43%.

In this review, most of the interventions were performed at levels of care 2 and 3 according to the Kaiser model. Our intervention took place in primary care (level 1) where it should be implemented first for the purposes of preventing the need to get to levels 2 and 3. Furthermore, many of the efforts to prevent overweight and obesity are done in school settings, where it is not possible to work with the families and get them involved in pursuing healthy dietary habits and regular physical exercise31-33. Thus, another strong point of the Obescat study is that it was done in PC settings.

The Obescat recommendations helped improve various dietary habits, since fruit consumption increased significantly in the IG, but on the other hand there was a decrease in the consumption of milk and dairy products. There was also a significant decrease in the consumption of sweets and candy in both groups. The deleterious habits that were changed for the better were: a decrease in the percentage of adolescents who “snacked” when they were bored, ate between meals, or had the habit of eating faster than others. Thus, the Obescat counselling helped them become aware of their unhealthy relationship with food.

As expected, since the sample consisted of overweight and obese adolescents, the initial questionnaires showed undesirable physical activity habits at the outset of the study: they spent more than two hours of screen time a day, while they only spent an average of 30 minutes a day in physical activity. The American Academy of Pediatrics recommends limiting screen time to no more than two hours of quality programming34, and a minimum of one hour a day of physical activity15.35.36. Contrary to what happened with dietary recommendations, the Obescat physical activity recommendations did not bring on any positive changes. One possible explanation for this is that parents have a degree of control over what their children eat, since they regularly buy and cook the food, but it is harder for them to control the time that their adolescent children spend doing sports and physical activity in general. Therefore, to change the physical exercise habits, the work must be done mostly with the adolescent.

An intervention based on providing advice for lifestyle changes has been proven to be effective in reducing BMI. The Obescat study has brought on an improvement of dietary habits, but not an improvement in physical exercise habits. Thus, when counselling is provided to the adolescent, more emphasis must be placed on the importance of physical exercise; and when the parents are being advised, the provider must emphasise the importance of limiting the time spent in front of screens for recreational purposes. The research should continue in order to figure out the ideal frequency of visits to make follow-up assessments and achieve long-term benefits.

We thank the participants of the Obescat study, their parents, and the field and laboratory staff.

The authors declare that they had no conflict of interest in relation to the preparation and publication of this paper.

Funding: IX Research Award Nutribén 2007. Partial data from this study have been divulged as an oral presentation at the XVIII Symposium Club Of Social Pediatrics in Barcelona, March 7-8 2008, during the 15th Annual Meeting of the Catalonian Society of Pediatrics in Berga, May 16-17 2008, at the 2nd Congress of the European Academy of Paediatrics-EPC in Nice, October 24-28 2008 and the XX Congress of the Spanish Society of Adolescent Medicine in Salou, April 23-24 2010; data were also presented as a poster during the XXII National Congress of the Spanish Society of Outpatient and Primary Care Paediatrics in Tenerife, October 16-19 2008.