Patients and methods: a retrospective descriptive study was conducted by reviewing microbiological results and medical records of children from 0 to 15 years assisted in the Emergency Department in the period of one year.

Results: 921 tests were requested corresponding to 837 patients, mostly urine cultures (45.2%), blood cultures (19%) and stool cultures (14.6%). Laboratory reported 246 microorganisms, mainly bacteria (91%). Antimicrobials were prescribed to 333 patients. After the reviewing of the microbiological results, treatment was modified in 109 (13%) patients: 96 interruptions, 3 changes and 10 new prescriptions. The results were reported to 381 patients, 218 in the positive results group and 163 in the negative results group. The urine culture was the sample involved in 63% of therapeutic modifications.

Conclusions: monitoring of microbiological tests on patients attending emergency department and modification of antimicrobial treatments prescribed may improve the use of antimicrobials in the Emergency Departments.

The number of visits to Paediatric Emergency Departments (PEDs) is gradually increasing in the absence of an increase in the paediatric population that would justify this phenomenon. Fever and other symptoms associated to infectious illness are the most common reason for seeking emergency care.1 In cases in which microbiological tests are requested as part of the diagnosis, the results usually become available when the patient has already left the PED. Consequently, the information needed to establish the aetiological agent is rarely available by the time of discharge, and prescription of antimicrobials is nearly always empirical. The results of microbiological tests eventually confirm or refute the appropriateness of the prescribed antimicrobial therapy, and therefore it is necessary to follow up on these tests.2

The subsequent modification of antimicrobial treatment as needed is a key element in reducing the inappropriate use of antimicrobial agents and unnecessary health care costs, as well as in preventing the development of bacterial resistance to available drugs.3

The aim of this study was to analyse the followup of microbiological test results in a PED and its impact on therapeutic decision-making.

We conducted a retrospective descriptive study of the results of microbiological tests performed in children aged 0 to 15 years managed at the PED of an urban clinic in the course of one year (May 2014–April 2015), and of the adjustments to treatment made after their interpretation.

The protocol for the followup of microbiology laboratory test results consisted in recording the patient’s information, date and processed clinical sample in the corresponding log. Samples were processed following the routine protocols for the collection and transport of microbiological specimens.4

The paediatricians in the PED team reviewed the microbiological test results that had been submitted and assessed them in the context of the patient’s medical records, which primary care paediatricians do not have access to, even though it would be desirable. Patients were notified by telephone of microbiological tests results if the results were positive, a prescribed treatment needed to be modified or a new treatment initiated, medical followup was required on account of the patient’s history or the isolated microorganism, or when the family or physician of the patient had explicitly requested it.

We defined a positive result as the isolation or detection of a microorganism known to cause the observed clinical manifestations. We considered microbial contamination and the absence of microbial detection negative results.

Prescribed treatments were modified if they were not the most appropriate according to the consensus for empirical antimicrobial treatment of infections in children of the Sociedad de Urgencias de Pediatría (Spanish Society of Paediatric Emergency Medicine [SEUP]) and the Sociedad de Infectología Pediátrica (Spanish Society of Paediatric Infectious Diseases [SEIP]).5

We obtained the approval of the Ethics and Research Committee of the hospital to conduct the study, as well as the informed consent of participants or their legal guardians.

In the year under study, there were 20 813 patient visits, and 921 microbiological tests were performed in a total of 837 patients. The most frequent diagnoses were fever without a source (FWS) in 22.8% of cases, followed by urinary tract infection (UTI) in 22.6% and acute gastroenteritis (AGE) in 14.7%. The tests ordered most frequently were urine, blood and stool cultures (Table 1). 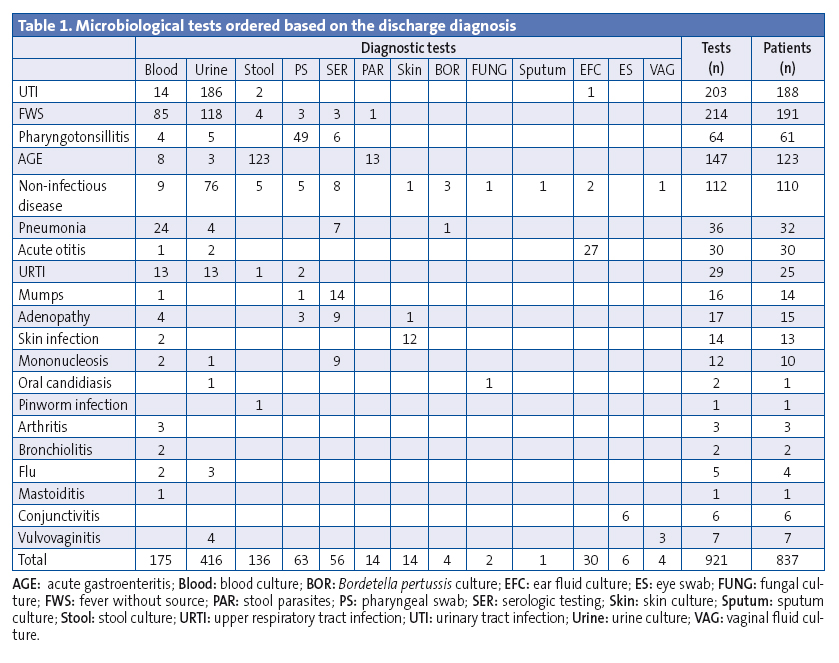 There were 246 positive results with isolation of a microbe: 225 corresponded to bacteria, 18 to viruses, 2 to fungi and 1 to pinworms. The most frequent microorganisms were E. coli (81), followed by C. jejuni (32), S. pyogenes (22) and S. enterica (19). Ninety-eight (43.7%) of the urine cultures were positive. Twenty-two (12.6%) of the blood cultures exhibited bacterial growth; in 18 of them, the isolated bacterium was S. epidermidis, which was considered a contaminant upon review of the patient’s records. The other 4 corresponded to a UTI with bacteraemia by E. coli, and infections by S. aureus, S. agalactiae and S. pneumoniae, respectively, in patients with FWS.

The test results were reported to 381 patients, and were positive in 218 cases and negative in 163 cases. The turn-around time (TAT) from the time tests were ordered to the time their results became available was 2.7 days on average, and differed based on the type of test that was performed (TAT < 48 hours in 65.6% of urine cultures, and TAT > 48 hours in 73% of stool cultures).

There were treatment modifications in 15 patients in the positive results group: discontinuation in 2 patients receiving antimicrobial therapy that was considered unnecessary (1 with a positive Epstein-Barr virus IgM result, and 1 with isolation of S. enterica from stool culture), a switch from the prescribed antimicrobial in 3 patients (from amoxicillin to amoxicillin-clavulanic acid following isolation of S. aureus in ear fluid culture in 2 patients, and from ciprofloxacin to amoxicillin in a patient with acute otitis media), and new prescription of antimicrobial therapy to 10 patients that had not received any treatment (3 with UTI by E. coli, 3 with AGE by C. jejuni with persistent symptoms, 1 with a pinworm infection and 3 with pharyngotonsillitis caused by S. pyogenes). Positive results also led to medical followup in 6 patients: 3 were referred to the PED (corresponding to 1 case of UTI by E. coli with associated bacteraemia undergoing treatment with cefixime, and the identified cases of bacteraemia by S. pneumoniae and S. agalactiae) and 3 were referred to the primary care paediatrician (1 patient with isolation of E. coli from urine culture, 1 patient with AGE by C. jejuni and 1 patient with pharyngotonsillitis by S. pyogenes). The hospital did not contact 28 patients in the positive results group (11.3%), although the receipt of the laboratory report and the test results were documented in the medical records.

The negative results of 163 tests were reported following the explicit request of the family or physician of the patient (69 patients) or with the purpose of discontinuing a prescribed course of antibiotherapy (94 patients).

Microbiological tests were ordered for a considerable number of patients in the year under study, amounting to 6% of the total visits to the PED. This reflects the significant burden of work outside of direct patient care involved in the followup of microbiology laboratory test results in the PED, for which there is usually no specifically designated staff.

In most cases, orders for microbiological tests were motivated by fever in the context of infectious illnesses of unknown aetiology and suspected UTI or AGE, which were the most frequent presenting concerns, as has been described in the previous literature.6 However, the performance of microbiological tests did not always conform to the diagnosis and treatment protocols applied in paediatrics,7 especially in the case of urine cultures, which were ordered for nearly any type of clinical infection (Table 1).

The overall percentage of positive results for the microbiological tests ordered in the period under study was 26.7%. Pathogenic microorganisms were isolated from 2.2% of blood cultures, a percentage that is similar to those reported in other studies after the introduction of the pneumococcal conjugate vaccine.8 A diagnosis of bacteraemia calls for a thorough review of the case and a prompt medical evaluation of the patient. In our study, we found documentation for the clinical and laboratory followup of the 3 patients with bacteraemia by E. coli, S. pneumoniae and S. agalactiae, all of who had favourable outcomes. However, there was no record of reporting the results or of any other contact with the patient with bacteraemia caused by S. aureus, which is considered a serious error in documentation and clinical management. Urine cultures confirmed the presence of a UTI in 23.6% of the suspected cases, as has been described by other authors.9 They were also useful in ruling out 66 cases of suspected UTI that were not confirmed, allowing the discontinuation of the prescribed antimicrobial treatment. This corresponds to a significant percentage of false positives in urine sediment examinations (36%), despite the availability of protocols that clearly delineate the most suitable urine collection methods in children with and without bladder control.4

The results were reported to 45.6% of the patients. In 18% of these cases, the results were negative, and they had been reported in response to families that explicitly requested “confirmation” of the good health of the patient, which did not contribute in any way to the review of care outcomes. Conversely, there was no record of families being notified of positive results in 28 cases, which is considered inadequate.

In conclusion, the followup of microbiological test results in patients that visited the PED was useful, as it allowed the modification of 32% of the prescribed treatments. In addition, all unnecessary courses of antimicrobial therapy were discontinued, while new treatments were prescribed in patients with positive results when necessary. Moreover, the analysis of the process as a whole allowed us to identify opportunities for improvement that could contribute to the optimisation of antimicrobial therapy in the PED.

We are aware of the considerable limitations of this study. Its retrospective design may have led to missing relevant data not recorded in the discharge report or the laboratory results log. The review of the medical records summarised in the discharge reports, especially in the most succinct ones, may have suffered from the subjective bias of the writer. Last of all, we operated on the assumption that the discharge at diagnosis, on which the appropriateness of antimicrobial therapy is based, was correct, and there is no means to verify that that was actually the case.