Survey of the attitudes of professionals towards breastfeeding

Introduction: the Initiative of Child-Friendly Hospitals and Healthcare Centres (IHAN) aims at improving the quality of care provided by the different healthcare centres, whether they are hospitals or Primary Care clinics, with the purpose of improving the quality of mother-father interactions with the newborn, also improving the rates of breastfeeding (BF) and the overall wellbeing of families. The implementation of most of these measures requires the favourable attitudes of healthcare professionals, since they do not always require complex means or resources, and thus their establishment in hospitals and healthcare centres is more a matter of motivation than of costly investment.

Materials and methods: a survey was made of professionals involved in paediatric care to assess their attitudes towards BF. The survey was distributed online using the mailing lists of the Spanish Association of Primary Care Paediatrics (AEPap).

Results: 431 questionnaires were collected, of which 70% were filled by paediatricians, 11% by midwives, 8% by family physicians and nurses, and 4% by other professionals. 63% of the total was aware of the IHAN initiative. 45% of the respondents had a written document about BF, and approximately 58.7% knows at least one BF support group. 32% set up the first appointment with the newborn for the first week of life. 62.5% recommend introducing complementary foods after six months. 82.5% recommends the use of non-pharmacological measures for pain management. 37% is aware of and uses the growth charts of the World Health Organization. The use of these charts has a positive correlation with the recommendation of introducing complementary foods at six months.

Discussion: we did not find any correlation between the recommendation of introducing complementary foods before six months and having received funding from the breast milk substitute industry.

The “child-friendly healthcare centres” initiative has been developing for a few years in the wake of the “child-friendly hospitals” initiative1 (IHAN). These initiatives aim at improving the quality of the care provided by different healthcare centres, be they hospital or primary care (PC) clinics, with the purpose of improving the quality of the mother-father interactions with the newborn, along with improving the rates of breastfeeding (BF) and the general wellbeing of the families. This initiative is also associated to an approach to the care of children and their families in which BF, the kangaroo-mother care method, or non-pharmacological pain relief measures play an important role1-5. The implementation of most of these measures requires a favourable attitude on the part of healthcare professionals, since such measures do not always require complex means or resources, and thus their establishment in hospitals and healthcare centres is more a matter of motivation than of costly investment. The present work aims at evaluating the attitude of PC healthcare professionals toward these issues.

Target population: at first, the survey addressed professionals with an association to BF (hospital and PC paediatricians, paediatric nurses, midwives and MIR medical residents) in Aragón. Later on, the sample was expanded to include the remaining autonomous communities of Spain, and particularly Madrid and the Canary Islands.

The survey was distributed online and addressed to the members of the ArAPAP, PEDIAP, SPARS, AMPap. It was also sent to the Association of Midwives of Aragón (Appendix I). The data were collected using the survey tool of Google Docs®, and data analysis was done using Excel® and Gstat-2®.

Study design: descriptive and observational. The data were gathered between September and November of 2010.

Total number of responses: 431. The sources of the responses are shown in Fig 1. 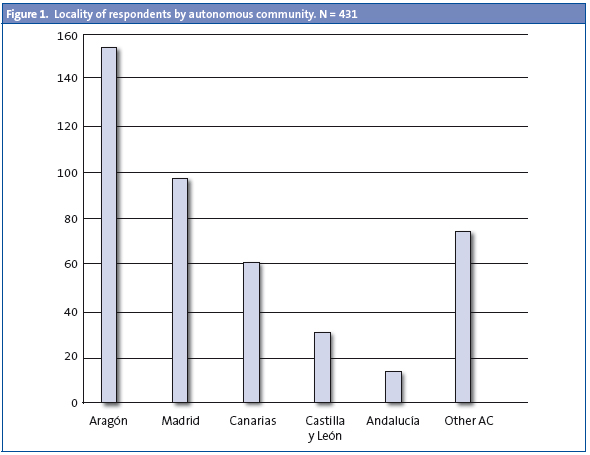 Out of all respondents, 63% were aware of the “Child-friendly Healthcare Centres” initiative. As for the breastfeeding committees. 45% of respondents answered that there was a written document about BF in their centre, 39% were not aware of it, and 13% did not know or did not answer (n/a).

In regards to knowing about BF support groups in their area, 57.6% answered in the affirmative, 23.3% answered they did not, 12.4% did not know or did not answer, and 6.6% of respondents reported such a group existed in their own HCC.

The survey also asked about training: in 76% of the cases, the respondents had received some kind of training on BF, and in 34% of the cases their centre had organised some educational activity about BF in the past three years.

An important question is when complementary foods are introduced. 62.7% of the respondents recommended starting at 6 months, 33.4% recommended their introduction between the 4th and 6th months of life, 1.2% gave a different answer, and 2.5% did not answer or did not know. 40.6% recommended co-sleeping, 87.2% the kangaroo mother method, and 89.6% recommended expressing and storing breast milk.

When it came to the time of the first post-natal visit, 29% reported scheduling it within the first week of life, 52% between 8 and 15 days post-birth, and the rest chose different answers. If we analyse the data pertaining to the four-month visit, 27% of these visits are attended by both the physician or paediatrician and the nurse, in 24% only the paediatrician or physician attends it, and in 38% only the nurse does. For the six-month visit, 43% are held by doctor and nurse together, 32% by the physician or paediatrician alone, and 13% by the nurse alone; the rest of the respondents chose different answers.

Non-pharmacological pain relief measures are recommended by 83% of respondents. The circumstances in which they would recommend these measures would be: excessive crying (37%), baby colic (81%), vaccinations (66%) and heel punctures (61%). As for the measures that they would recommend, 80% reported recommending skin-to-skin contact and caressing; 83%, breastfeeding; 48%, kangaroo mother care methods, 31%, sucrose, and 25%, the use of swaddling.

81% of respondents would prefer to make an observation of a feeding and BF assessment in the office when they deemed it necessary.

In 38.5% of the cases, the respondents reported that advertising materials for breast milk substitutes could be seen in the paediatric offices, hallways, or waiting rooms. 57.4% had received funding from formula manufacturers in the past three years.

We compared the time at which complementary foods were introduced, whether it happened between 4-6 months of age or at 6 months, to who mandated it, the paediatrician or the nurse.

If we exclude the data collected from midwives, nurses, and respondents who did not know or did not answer from our hypothesis testing, the study shows that the use of the WHO growth charts is positively correlated to recommending the introduction of complementary feeding at six months or later (χ2 = 21.72; p < 0.0001).

The main conclusions from testing our hypotheses are the following. It was established that holding a permanent position in the public healthcare system or having a private practise had a positive correlation with receiving funding from the breast milk substitute industry.

Our study showed no correlation between receiving funding from the formula industry and recommending the introduction of complementary foods at an age younger than 6 months.

The present study does not pretend to be representative of the opinion of every PC professional. However, we collected a considerable number of responses by means of a simple tool, which was low-cost, easy to use, and easy to disseminate, and which we believe to be a valid tool for conducting surveys. We are aware that this tool is biased in that it requires the use of the Internet, however, the Internet is widely used in PC. The differences in the response rates between autonomous communities can be accounted for simply because in some communities there were people in charge of promoting the survey and in others there were not.

The survey results (SR) allow us to reflect on the care provided, and to formulate proposals for improving this care. First of all, according to the SR, the first appointment with the newborn happens somewhat late, since only 29% of respondents report recommending that the visit take place before the seventh day of life. It is well known that doing the first check-up in the first week of life shows an improvement in BF rates and better outcomes if there is dehydration due to lactation failure2.

It is interesting to see how BF committees are gradually being established in many areas. This resource is still the exception to the rule, and it clearly shows the challenge it poses in requiring the involvement and coordination of different areas of PC and hospital management and clinical practice and their professionals. However, we believe that it could be an important tool for coordinating care, and decreasing the variability of BF education and research4. Most respondents reported that they knew of one or more BF support groups. Still, we believe that such groups should be promoted further, given their demonstrated efficacy in improving BF rates, and because they are a type of activity characteristic of PC6.

We still think that the percentage of professionals that recommend introducing complementary foods starting at 6 months ought to improve, since this is one of the key points of the 10 facts on breastfeeding published by the WHO to promote BF, and of the child-friendly HCC initiative1. The study showed no differences in the recommendations about complementary feeding between paediatricians and nurses.

As for pain management, the SR show that there is a great awareness of this issue and that the main measures of pain management are well known2. Still, the SR reflect attitudes and do not document actual practises, which could be different.

The variability in how four- and six-month check-ups are performed probably reflects a reality and a practice in which, on the other hand, there is very little evidence7-9.

It is worth noting that 37% of the SR report the use of the WHO growth charts. When we analysed the relationship between the types of chart used and the time at which complementary feeding was introduced, we found that the use of the WHO charts was positively correlated with the introduction of complementary feeding after six months of age. Our study also shows a positive correlation between the use of the WHO charts and the knowledge about BF support groups. This does not prove a causal relationship, but it does mean that the use of these charts is more frequent in professionals who also show a greater tendency to recommend exclusive BF up to six months and to promote attending BF support groups. The data also confirm that there is an increasing trend in the use of WHO growth charts, particularly in PC. It should be kept in mind that, although the charts were not conceived specifically for BF babies, they have the advantage of having been developed based on babies that had been breastfed10.

Finally, we should report that our study did not show any correlation between receiving funding from the breast milk substitute industry and the earlier introduction of complementary feeding. Nevertheless, it must be noted that there are still many centres where advertisements of BF substitutes can be seen in hallways, waiting rooms and offices, a practice that, as it is well known, is absolutely forbidden11.

We would like to thank the 431 professionals that took a few minutes to answer this survey, without whose cooperation we could not have done this study.

The authors declare that they had no conflict of interests in relation to the preparation and publication of this paper.